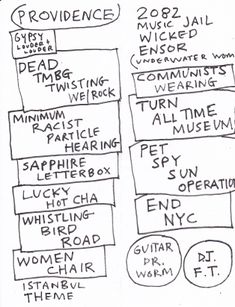 I arrived expecting a good show, and as always, They delivered. I was here with my fiancée, who is not a fan in any particular way, but politely supports my enthusiasm.

This was the first time I've attended a show where everyone was seated throughout. Usually Flans will call people up for a dance party a little way through, but the aisles here were pretty narrow and there was at least one fan up front in a wheelchair, so it was probably best for accessibility and fire safety that we stayed put. People danced in their seats as energetically as they could.

Dan Miller arrived comically late onstage, I want to say about halfway through Dead. A few people, possibly even band members, chuckled at his belated appearance.

The venue was surprisingly cold, which both Johns commented on.

Flans: I have a feeling there is no climate control happening here. Just a feeling.

They brought up the podcast Crimetown, set in Providence, and Flans made a comment about how all their "local color" comments would be podcast-related now. He also referred to the fans in the box seats as being part of the mob (one of those fans was Mike Birbiglia, which I know because there was a large RESERVED seat with his name on it in letters large enough for me to read from across the room.)

Providence also got a shoutout as the home of Linnell's former 80s New-Wave band, the Mundanes. (Me: I understood that reference.)

Curt Ramm showed up a few songs in to great applause. I hadn't realized he would be on this tour and I was so, so happy. (Then I had to explain Curt Ramm to my fiancée.)

Particle Man included an extra verse about Triangle Man taking off for the planet Venus, sung in a strange, warbly voice.

Just before Stilloob I saw Flans adjusting a music stand with lyrics on it and wondered what was about to happen. Linnell explained how hard they'd worked to phonetically learn the lyrics backwards.

Linnell: We have gone to immense effort for minimal results.

They encouraged us to record Stilloob and upload it to YouTube. Flans noted that whatever YouTube bot their record company was using, it was very effective, because the video someone had uploaded of the previous night's performance was immediately flagged as their music, even though it was backwards. There was some talk about how maybe we should just elect the robots.

Flans, several times throughout the night: Remember, vote for anyone!

After the song, Flans repeatedly referred to Linnell as "Nohj."

Birdhouse in Your Soul was as rocking as ever, and after that came a lovely, dreamy segue into Road Movie to Berlin, which included the "King of Liars" verse.

The end of "Road Movie" felt like a showstopper (or Set 1-stopper), but when it was over the Johns admitted that although most people would end the show there, they actually had several more songs on the album left.

I had to whisper explanations about several portions of the show to my fiancée ("Oh, Dan Miller is going to play a long solo now that will eventually turn into Istanbul"... [At the end of Spy] "Yes, this is part of the show, they're improvising this, and they'll probably bring us into it right about AHHHHHHHHH *pause* AHHHHHHHHHH, yep, there it was.") I was gratified by how loudly she laughed at all the between-song banter.

At the beginning of the encores, Flans finally called us all up for a dance party to The Guitar. I was at the front in a flash, dancing my dorky heart out; my fiancée happily stayed in her seat. This was just as well, because during Doctor Worm, Miller suddenly appeared in the box seat directly above her head and played a solo!

Before Hey Mr. DJ, the Johns mentioned that at the previous night's show, they'd tried to end with that song, but it hadn't worked because they did a fadeout at the end that didn't give the correct sense of "This show is now over." So they abandoned the fadeout this time around, AND played Fingertips after so we would all have closure. And there's nothing like ending a show to the slow build of "I Walk Along Darkened Corridors."

All in all, a great show. --Redheadedsnippet (talk)

I went with my brother: it was his first show, my second after 2018-04-27. And while it didn't have that same first-show magic, it was an overall better experience because we had nice seats and I didn't have to crane from a balcony. Flansburgh commented: "This is the first show we've played in a while where the people are sitting down, sober, and facing us. So if we seem a little nervous..."
I wish I'd written this sooner after the show, but Redheadedsnippet captured the whole thing pretty well. The show was a blast. I'm glad they played Flood in the first set. I was dying of laughter throughout Stilloob, but I managed to record it and reverse it when I got home, and it was every bit as rewarding as Flans promised. (Though despite Linnell's assertion that "all the meaning has been drained out of the song and you will not enjoy listening to it", the forwards version was just as entertaining. I had to admire the gusto with which the Johns sang "STOSH-NOG!")
The word "spooktacular" actually came out of John Linnell's mouth at one point during the Quiet Storm. Who would win: They Might Be Giants Quiet Storm Spooktacular, or the Strong Sad Gets Decked Repeatedly Stunt Spooktacular?
Wearing A Raincoat, Turn Around, and Museum Of Idiots were all delightful surprises during the second set (I purposely avoided looking at previous shows' setlists beforehand so I wouldn't spoil anything for myself). Why Does The Sun Shine? featured Linnell delivering sun facts in a normal speaking voice before midsentence slowing wAY DOWN TO A DEMONIC BELLOW. And that was before he lost it entirely, as the above review mentioned:
"The heat and light of the sun are caused by the nuclear reaction between...
ELECTRIC GUITAR!
LOWER ELECTRIC GUITAR!
[gestures to drums] ROUND ELECTRIC GUITAR THAT YOU HIT WITH STICKS!
[gestures to keyboard] ELECTRIC GUITAR WITH BLACK AND WHITE KEYS!
[gestures to self] ELECTRIC GUITAR SHAPED LIKE A HUMAN FACE!
And many others."
I don't know if I've ever laughed so hard.
There was one obnoxious dude in back of us who kept yelling "DON'T LET'S START!" between songs. Eventually people around him starting telling him to shut up, and I think Flansburgh even sniped back at him at one point, so that was satisfying.
The Guitar encore was spectacular. It was a beautiful second show. I think it left my brother with a good impression. And I picked up a signed green vinyl of Flood, the second side of which seems to be a bit scratched unfortunately, but it was the perfect bookend to my buying an I Like Fun vinyl at the 2018 show. SRMX12 (talk) 17:57, 17 February 2020 (EST)