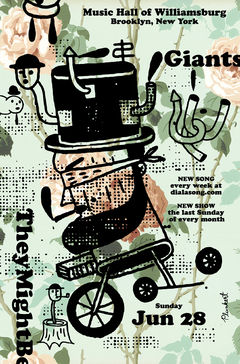 My family and I drove from the Boston area to Brooklyn for this show, and it was definitely worth it. Seeing Flans and JL (and Dan) was great, as always, but it was a rare privilege to see Marty, Danny, and Robin take the lead, too.

There was a lot of fantastic banter and commentary throughout the show. Here are some of my favorite moments.

About a week before the show, I was helping my daughters learn the lyrics to Why Does the Sun Shine, and they were actually getting pretty good. I'm a little sad that wasn't part of the setlist for this show. Otherwise, the setlist was great. I'm actually a bigger fan of the kids songs they played now that I've seen them performed live.

Minor nitpick: I don't see it on the setlist, but I'm pretty sure they played Nonagon, too.