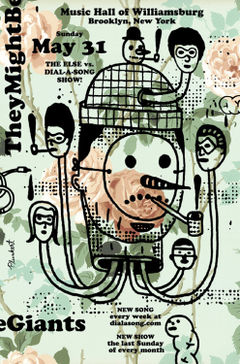 I thought it was a very enjoyable, high-energy show in an intimate setting. But then again, I only get to a show every couple of years, so I tend to really enjoy the ones I attend. Everything from The Else except for Feign Amnesia (I think), a good assortment of new stuff, and some great reachback deep into the catalog. So... who recalls the setlist? I had just enough to Drink! that I'd be hard-pressed to work it out with any accuracy. ebow (talk) 12:15, 1 June 2015 (EDT)

Out of the four show over the past 11 years I attended this was by far my favorite. The Else is one of my favorite Albums so that was a plus. I enjoyed everything from the music to the random banter between John and John, including the print on the mug John Linnell brought down stairs. Also have to the love the moment when technology fails and Danny's patch cable busted. I wished they would have played a snippet of Disappointing Show while they waited. I added the Songs that I remember where they were. jd_krug (talk) 3:28, 1 June 2015 (EDT)

Linnell was right, though - this is Vag Rounded: https://www.myfonts.com/fonts/linotype/vag-rounded. The typographer in me was proud! Tvman (talk) 01:42, 5 June 2015 (EDT)