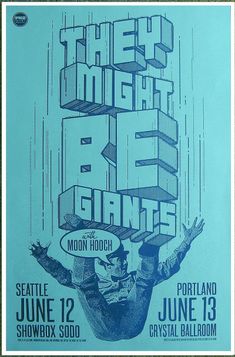 First off, let me just say that "No ID vs. Fake ID" could have been the best Battle For the Planet Of The Apes in history. Thank goodness for Oregon's drinking laws. The setlist was so good, Puppet Head, Letterbox, End of the Tour, Minimum Wage, NYC, Don't Let's Start, and everything else. And this show was way different from the 2011 show, less banter, but I felt like this one was a little more... Hmm, don't really know the way to describe it, it was just awesome. No Miller Time on istanbul, no band on istanbul! Loved the John's arrangement. Melodica on Icky was super cool, and whatever that stylus synth Flans had made me happy.

I was able to find out that John was wearing Chucks, FUCK YES. Grey lowtops. Godddddddddddd makes him like 500% sexier I swear.

After "New York City" Flans said, "There are professional photographers here--make me look thin!" Then he said that there were very tall people and there were very short people stuck behind them, sending desperate tweets.

Then John said that the next song was "off the new album, Nanobots--that's my name for it, some people have other names for it." JF: "I've been calling it Join Us all this time."

After the next song, Flans said he'd gone to the music store across the street and they had the CDs and vinyl separated. "And I was thinking, 'Is vinyl over?' Because they had the vinyl quarantined."

I was superexcited to see "Letterbox" and "Don't Let's Start" again as they're a couple of my favourite songs.

Before "Circular Karate Chop" Flans said it was a song about "a guy with a lot of transferable skills--he can go to jail or he can go to juvy.

Then they were getting ready to do "Nanobots" so it was time for "Robot Flans" again. He said to John, "You look like hell. Have you been eating roadkill again?" JL: "You mean still?" JF: "That stuff is delicious." Then he did the following joke: "A salesman goes to a house and a little girl answers the door. She's smoking a cigar and drinking a glass of Johnny Walker scotch. And the salesman is pretty disturbed, and he says, 'Little girl, are your parents home?' and she says, 'What do you think?'"

Then he was singing something in two different voices and saying there were two of him and John was like, "I don't know which one to shoot!" and he was holding up his fingers like a gun.

During "Icky" John is just singing, not playing anything, and he's been slightly spazzy on it, but not nearly as much as he usually is, so that's disappointing.

Before "Turn Around," John was improv-ing a song on his accordion that was like, "Making up a pointless song, a completely pointless song/Testing the patience of everyone here."

The Avatars were talking about how they were texting things but they called it "socksting" and then said they needed to trademark that.

If they have to do "Istanbul," I enjoy this duo and accordion arrangement much better than the full band version, so that's something. I also appreciate that they're not closing with it.

Before "The Mesopotamians" John said it was a show that had been "a summer replacement for Laugh-In," and then that we were too young to remember that. Then he said something about it having a long shelf life and being made of mayonnaise.

"James K. Polk" is not nearly as fun without the confetti cannons. John said he was why "you're not speaking Canadian."

Flans said that they enjoy playing at the Crystal Ballroom because there are so many things that are unique about it, including the temporary stage--"You've heard of food insecure, They Might Be Giants is stage insecure." (I have no idea what that meant.) Then he said that the audience was divided and that it was "Soviet thinking."

Then they played a variation on "Battle for the Planet of the Apes" where instead of "People" and "Apes" it was "No ID" and "Fake ID." I'm always upset during that when I don't get to be on John's side.

They closed with "The End of the Tour" again which really makes a terrific closer.

I was disappointed that other than "S-E-X-X-Y" and "Battle for the Planet of the Apes" there wasn't anything in the set that they hadn't played the night before. But there were a lot of things I haven't seen much and really really love so I guess I can't complain too much, and John was superadorable of course.