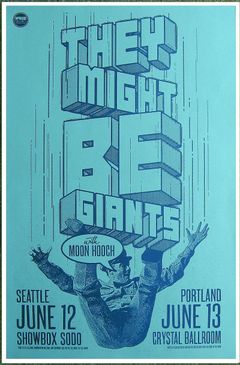 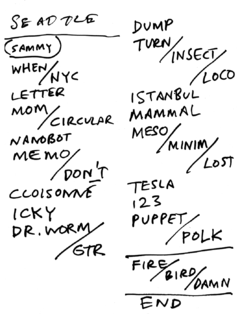 After "New York City" Flans said hi to John and John was like, "I got nothing." Then he said something about the weather, and someone said something about his birthday, so I tried yelling happy birthday at him, but I don't think he heard me--very disappointing. But I was still very excited about getting to see him on that day.

I was very excited to see "Letterbox"--it's one of my fav songs off Flood and I think I've only seen it at Flood shows. And I didn't know of them playing it any times lately so I was very surprised by it.

Then John said they had a new album out that's "so new its mother is still licking its fur, and its eyes aren't open."

Flans did the "Robot Flansburgh" bit with his vocal effect before "Nanobots." He said his "repairman" (who he has to see instead of a doctor because he's a robot) had put him on a smoked meat diet. Then he told the joke, "Why did the hipster burn his mouth? Because he ate his pizza before it was cool."

After they played "Nanobots" Flans was telling a story about them coming through customs coming back from Vancouver. He said they had "a cash-sniffing dog" and that they were like "You have cash" and they were like "Yes, we're adults, we thought we might need it."

A bit later they played "Don't Let's Start," HELL FUCKING YES. I've only seen it a couple of times before and of course it is one of the ABSOLUTE BEST TMBG songs so it's always a definite highlight.

When they were introducing "Icky," Dan Miller was showing off his melodica, and Flans was telling a story about how they'd had an assistant person helping them the other day who'd had a breathalyzer in his car, and that sometimes he had to breathe into it in the middle of driving. Then John said Miller showing off the melodica reminded him of a stewardess, and "make sure to play your own melodica before assisting your child."

They're doing "Istanbul" duo and on accordion, which certainly makes it more tolerate. Tonight they did a lot of silliness with it, stretching out a lot of the lines and making them goofy.

After "Mammal," John was commenting on a guy in the crowd who was in a wolf costume for no apparent reason.

Before "James K. Polk," John said that he's "the reason you're not Canadian."