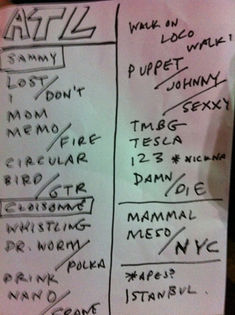 Just another great They Might Be Giants show. The left-half of the audience won the "Peo-ple" vs "Apes" showdown, and started another spirited "Peo-ple" chant while awaiting the second encore. Dan Miller looked a bit under the weather, but it didn't show in his performance. The band announced that the following night's Flood show would be in reverse sequence. Also, Moon Hooch was an amazing opening act. I don't know how much I'd want to listen to them on a recording, but in-person they were phenomenal. Olympic marathoners don't have that kind of gas tank.