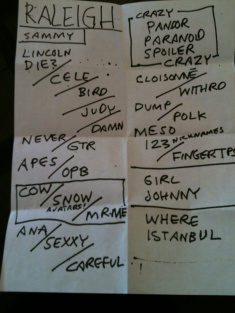 They Might Be Giants
— with Jonathan Coulton opening —
Lincoln Theater in Raleigh, NC
February 15, 2012 at 9:15 PM

This show was pretty excellent. Coulton was fun, he played some of my favorites such as Code Monkey and Je Suis Rick Springfield. I was up in the stage-right balcony, so I had a decent view of everyone but Marty. During a few of the songs, a LCD projector played videos, including during When Will You Die, Celebration, James K Polk, and Can't Keep Johnny Down. The first was various clips of a hand brandishing various weapons and sharp objects, such as scissors, garden shears, a fork, and plastic guns. Celebration used the underwater clips from the Electronic Istanbul video, and Birdhouse was a bunch of moving honeycomb-like things. In Battle For The Planet Of The Apes, I was a person, and despite the fact that on the second-to-last segment we were very confused and off-beat, a fact which the Johns called attention to, we still ended up winning. The Avatars came up for the spoken-word part of Snowball in Hell, with some additions. Joe had been drinking coffee for a few hours, and Paul claimed that he was always watching Joe. In fact, he watches Joe so much that he never even goes home; he just stands outside Joe's window. All the time. So yes, that was a nice laugh, and then the Avatars were gone for a few songs, popping back up for the Pandor jingle and Spoiler Alert. Sometime near the end of the show, the Johns said that they had nicknames for everyone in the audience, and Linnell shared a few with us. I don't recall any of them, except for the people on the stairs were The Stair Family, an indy supergroup signed to some Canadian label.