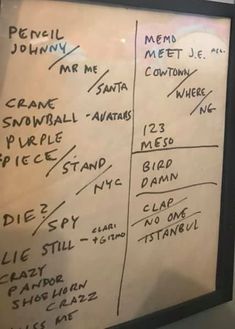 They Might Be Giants
— with Jonathan Coulton opening —
Variety Playhouse in Atlanta, GA
February 11, 2012 at 8:30 PM

This show was arguably the 2/10/12 show's personable yet uglier twin brother. Their second night in a row at the Variety Playhouse was filled with highlights, but was burdened by countless mistakes. As I stated in my recap of the 2/10/12 show, THAT was the Johns at their best. The same however, cannot be said about this show. Now don't get me wrong: the show was killer, as a Lincoln show only could be. Almost right away though, the band started playing two different songs at once. Linnell blamed it on the fact that he didn't wear his glasses on stage, claiming he read "Memo" instead of "Mr. Me". This led to tons of entertaining banter, but Flansburgh's energy levels took a nose dive, and seemed to be hindered by technical issues. Several times, Flansy introduced the wrong song, had several guitar and monitor problems, and even walked off-stage during the middle of Memo To Human Resources. The Band Intro segment was especially awkward when Flansburgh was interrupted by Linnell as he was introducing Marty. "But wait John, there's one more member of the band before you get to Marty" was essentially how Linnell cut him off. Flansburgh was noticeably annoyed/pissed and replied bitterly (trying to move away from the mic) "No, you're supposed to be introduced last". He seemed more than ready for the show to be over and never quite recovered after that. Mistakes notwithstanding, this was still a very special show, and the conga line and Lincoln-theme more than made up for them. Oh, and kudos to the 70 year old lady up against the stage who had more energy than anyone this night. Man, she was jumping from start to finish. Much more energy than the three people next to her crouching down to furiously eat pot-laced brownies in between every song. Sigh. -MSC

Gotta disagree, I enjoyed this show more than the preceding night's. The crowd energy was much better, at least from where I was standing. Just goes to show you how much your immediate neighbors matter, I guess. This show pumped me from the inside, it shattered my inner doubts about maybe having outgrown the band (or this level of fandom, at least). It had been too long, basically. (Come back to ATL more often, TMBG!)
Cowtown was probably my favorite of the night, right there at the apex of both Lincoln nostalgia and performance energy. It was impossible not to bounce along with, it animated even my non-fan friends. Johnny was another highlight for me; hearing that one live has given me a new appreciation for it. Then there's Die, which has got to be my favorite live performance of the new material. Although I can't blame them for omitting You'll Miss Me, I do wish they had tackled it; I still maintain that an updated version would be an awesome vehicle for some Flans stage-vamping.
I was also thrilled to receive a nickname from the band that night. —"Chestnut Mayor"