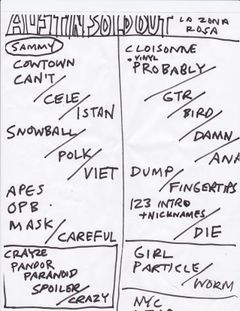 Both bands voiced their amusement at the odd floor plan of La Zona Rosa, specifically that nearly a third of the standing audience stretched far off past stage right, meaning that much of the stage was eclipsed by Marty Beller's drum kit. The Johns decided to cheat out to the far-flung visitors next to the merch booth, manned by someone they referred to only as Scarface.

After Flansburgh quipped that they have a strict "do not give a rat's ass policy" when it comes to fans filming and taking pictures of the show, a fan in the front row handed off his camcorder to Linnell, who wielded the camera mid-song before returning it to the audience member.

Flansburgh declared that the humans won the "Battle For The Planet Of The Apes" sing-along. Members of the apes section of the audience began to chant "Apes!" again during the applause between the encores.

During the Pandor sketch, the Green Avatar imitated a band that hadn't used Pandor by shouting out "It's great to be here at North by Northwest!"

Linnell introduced "James K. Polk" by announcing "This is a song about the eleventh president of the United States - we hate that guy!" It seemed like an apt song choice for the venue considering that Polk was responsible for the annexation of Texas.

There was also a brief sketch in which the band used a flash light to identify audience members and give them new nicknames. Three nicknames were dispensed, although the only one I remember is "The Pleasure Principle."