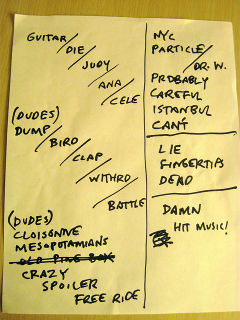 They Might Be Giants
— with Jonathan Coulton opening —
Harro East Ballroom in Rochester, NY
September 15, 2011 at 8:00 PM

Flans declared this show Dan Miller Day as it was held in Dan's hometown of Rochester, NY.

The Apes won the Battle. Flansy declared that this was the first time the Apes had won. The encores were then encouraged by chants of "Apes!"