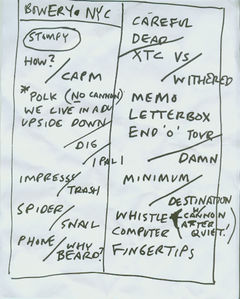 Part of a four-Wednesday-night stand at the Bowery Ballroom. Going along with the decade theme, this show celebrated the 1990s. 17 of the 27 songs performed were from this decade. Everything else, with the exception of Damn Good Times, was from 2007.

Whistling In The Dark was performed with the marching drum, and the confetti cannon. This was also the only song that accordion was used on. Dan Miller was playing a microKORG on a couple of The Else songs.

Kurt Hoffman was a member of the opening band, Les Chauds Lapins.

Well... this was the two of four show for the TMBG residency at the Bowery Ballroom. It took a while to get this one up because again we had some computer glitches. We lost the opening song, which originally made me not want to release this one. However, with a day off and missing my band mates, I listened to the recording and discovered some gems that should be put out there for future generations to dig. The rap in Phone Calls should go in whatever time capsule is being put together by a high school science class. It really is one for the ages with the grave providing an excellent take on how the dead deal with the downfall of the music industry.

Song selection also played a role in deciding to put this one out. As a 90's theme show a bunch of songs that rarely make the set list were shocked back into life for a brief reprieve. Dig My Grave, Dead, Destination Moon, and Letterbox, to name a few, show up for cameo appearances - perhaps not to seen again in this world for a while.

All in all a lively set with some great banter and clamarific performances. Sorry for the crap out on the first tune. If we play it again, I'll post that version as the sample so you can have the complete (although time incongruent) set.