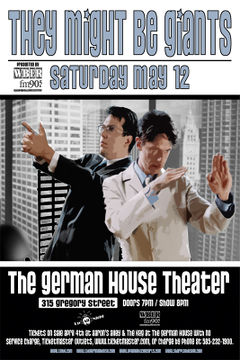 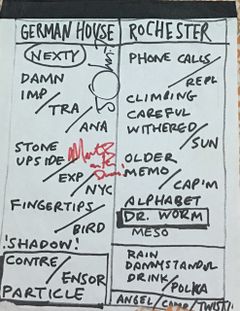 This was a great show overall, lots of enthusiasm from the band and audience and a nice roomy venue with a good-sized stage. John Flansburgh's initial comments about the venue were about how pleased they all were to be completely above the audience, recreating that whole metal show atmosphere. This was in addition to the total lack of oxygen. "How is it down there for you? Are you guys just going to pass out at the end of the show?"

Flans revisited a common theme from The Spine tour recordings when he declared the balcony to be the VIP section for all the rock critics in the house. He narrated what he believed them to be writing. "'No.' ...Next page. 'No.' ...Next page. 'Wrong. Answer.'"

Throughout this tour Flans has been keeping a running tally of bearded spotlight operators vs. clean-shaven spotlight operators. Tonight the score was evened to six-six by the beardless lighting folk of The German House. John Linnell wondered aloud when the cutoff date for the beard count would be. Flans theorized that there would be extremely well-groomed beards in Las Vegas, but Linnell had the more interesting theory that it would be a Tintin town, that there would be grand scimitar-like beards split in half.

Introducing Contrecoup and explaining the obscure word choices, Linnell declared, "We ran out of nouns. You knew it had to happen eventually."

"John, your voice is all low and slow all of a sudden," said Flans, changing to his acoustic.

"It's my middle-age voice," said Linnell. "In my middle age I'm becoming the father figure on, like... Family Affair."

Flans went offstage for Phone Calls From The Dead but because of the angle of lighting his huge distorted shadow was thrown on the curtained back wall, absorbing the drum set in its darkness. In falsetto he declared himself: "Bret Eastman Kodak! ...I'm a novelist! ...I've written a short story about the band!"

Before Climbing The Walls they revisited a favorite we've-got-new-material theme about how they didn't know any of their new songs.

"We'll all just be staring at our hands," said Linnell.

"No, we'll all be staring at your hands, John," said Flans.

"Right. They'll all be staring at my hands," said Linnell.

Things that are a gas on the sun include Alzheimer's and brain damage. Flans even wrote down stuff he wanted to say on a piece of paper and lost his place in the song. Noting this, Linnell decided to mess with him and deliberately sang his prompts out of order, flustering Flans until the latter just had to grin. The nuclear reaction was caused by the names of several streets or neighborhoods hereabouts.

The cannons went off for Doctor Worm tonight, and because of the three electric fans onstage it got swirled back onto the stage in huge cyclones of bright-colored paper. One got coated along the back with the scraps and continued to funnel little storms of it across under the band's feet for the rest of the song. Linnell held the last 'worm' for a really, really long time, not typical for live performances, impressing us all greatly with his lung capacity.

Flans started thanking people individually in the crowd, so the band struck up their Jazz In C riff to accompany his thanks and then stage announcements. Flans gave everyone an alternative to buying their new album when it came out: "Just leave your car keys up here on the stage."

During the intro to She's An Angel, Linnell grandly extemporized: "There was a time when dinosaurs ruled the earth." He grinned. "I'm just narrating. ...I met someone at the dog show..." The song continued normally until after the first chorus, then, "Ferns were the dominant plant life... and Sebastian Cabot was a rising star..." He switched back from Narrator to Singer. "Gonna ask for my admission, I'm gonna speak to the man in charge..."

Flans was very accessible after the show and sat at the front of the stage to sign tickets, do photos with fans and chat. He also hung out in front of the Keg bar adjacent to the theater for a while, watching the busloads of a university's already-sloshed senior night participants being funneled in to said bar before returning to the warmth of the tour bus.