From This Might Be A Wiki
< Shows
1 wikians attended: Artmonkeygirl 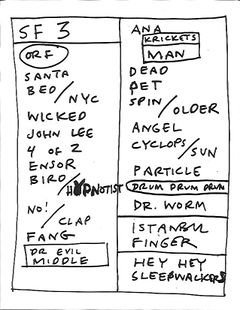 Review by Carefulwhatupack :
So, this was the third of three shows that I went to... and somewhere at the end of the night, I think I yelped: "My legs! I can't feel my legs!"

So that afternoon, it was much less windy and cold, which made waiting in line less unpleasant. (The Great American Music hall is located on beautiful O'Farrell Street, in the heart of the uh, "historic" Tenderloin, one of San Francisco's more er-"interesting" neighborhoods) which also makes waiting in line an fun and memorable experience.

At least two separate people who lived in the apartments across the street had to come up to us and ask us why we were standing in line. Sigh. Maybe they haven't yet realized that they live across the street from a nightclub?

Common Rotation opened Wednesday night, (Danny Weinkauf came out onstage to introduce them and Dan Miller played one song with them) with their full band. It was kind of interesting to see that they have developed a following in the past nine months. (I remembered an opening comment at the Petuluma show last July, of: "You don't know who we are, do you?") One of the songs was a cover of "Don't Let's Start."

When TMBG came on, the band seemed a lot happier and more energetic than Tuesday night. They opened up with "Santa Claus" and "Bed, Bed, Bed". (With the confetti cannon... oh, I also remember a wee misfire with the confetti cannon at Petaluma... imagine a lot of confetti. Imagine suddenly seeing nothing but confetti for about fifteen seconds and you get the gist of it.)

Towards the beginning, John Flansburgh said something to the effect of that they were saving everything for tonight and that they'd only been giving it 45-47 percent the previous two nights.

Robin Goldwasser also joined them onstage for the songs "Dr. Evil" and "In the Middle". For "In the Middle", she started off with something like the song was a public service announcement, but it was also about loss and love and disillusionment...

Then John Linnell said something about "Ana Ng" was also about loss and disillusionment... the next song after that was "Man It's so Loud in Here" which apparently wasn't about loss or disillusionment... but after John Linnell started talking about reading a review of tmbg in Variety and it was making him question everything. (I think Linnell said something about 'Man... in Here" was even described by Variety as a heavy metal song?)

One of the highlights was a version of "Particle Man" played to the Beatles "Taxman", which was a lot of fun. They really looked like they were having a good time with this. They also perfomed "Istanbul" with Dan Miller playing the intro on the acoustic guitar. (Flansburgh: "4 minutes snapping your fingers, 4 minutes of clapping". Yay! We get to clap again! We're good at clapping!)

They ended with "Hey, Hey We're the Monkees" and "Sleepwalkers."

It was a (fun and exhausting) three nights...