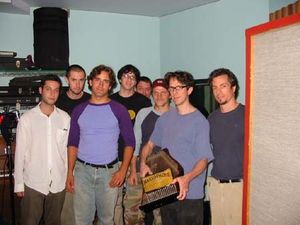 Common Rotation with John and Danny

Common Rotation is a folk/pop group that hails from Long Island and currently resides in Los Angeles. Influenced by the likes of Woody Guthrie and Bob Dylan, among others, Common Rotation has a unique and ever-evolving sound. Subversive lyrics and up-tempo music are often staples of the band's songs as they strive to achieve the feat of revitalizing the old-time folk and country sound while still giving a voice to the people of today—even if the people don't know it yet.

The band's line-up is:

Common Rotation has toured as an opening act for They Might Be Giants on more than one occasion, including the first half of the Spine On The Highway Tour. Frequent TMBG sound guy Brian Speiser produced two of Common Rotation's albums, The Big Fear and Isalie. Danny Weinkauf co-produced and played on The Big Fear, and John Linnell, Dan Hickey, and Dan Miller all appeared as guest musicians on it. Danny Weinkauf and Dan Miller played on Isalie. Common Rotation has covered the TMBG songs "Don't Let's Start" (which appears on The Big Fear), "Hey, Mr. DJ, I Thought You Said We Had A Deal," and "It's Not My Birthday."