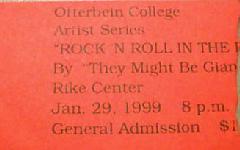 They Might Be Giants
— with You Were Spiraling opening —
Otterbein College in Westerville, OH
January 29, 1999 at 8:00 PM

If ever there was a universal language, the alternative rock group They Might Be Giants has found it in their music.


They Might Be Giants performed at the Rike center Friday, Jan. 29 as part of this season's Artist Series in cooperation with the Campus Programming Board. The gathering combined an eclectic group of music listeners.
The band was formed by John Flansburgh and John Linnell in 1984 [sic] after a meeting in Massachusetts. The duo are originally from Brooklyn, New York and continue to base their roots there.
The music at the concert was a formation of acoustical guitar, keyboards, electric guitar, electric bass, drums and even an accordion. Flansburgh learned to play the guitar when the band first formed and Linnell took that time to learn the accordion.


The 1700 concert goers in the pit were singing along with the band, jumping up and down, body surfing (an event where a person is lifted into the air and is then passed along by people in an attempt to reach the front of the crowd) and even had the chance to join in a few conga lines.
This concert was the third concert in the band's world tour. The tour was to promote "Severe Tire Damage," their latest CD. In an interview with WOBN, Flansburgh and Linnell said that while they have enjoyed touring, they want to slow down now to take advantage of their free time to not only produce more music but experiment more musically.
The band has produced over 72 songs in their career, some of which include Istanbul (Not Constantinople), Birdhouse in Your Soul, Why Does the Sun Shine, and even the soundtrack to Mighty Morphin Power Rangers. They Might Be Giants is a name taken from a 1972 George C. Scott movie.


This was the biggest live rock concert the College has sponsered. Eighty student volunteers were recruited to help unload equipment, serve as security guards, work on the technical crew, sell tickets, sell souvenirs, and load equipment at the end of the night.

Review by Slondo1@aol.com:
Okay, to begin with, we drove for around 4 hours to get to Otterbien (North of Columbus), and ended up at this small college with the most bizarre gym ever. There was a giant dome above the part where TMBG were going to play, but not anywhere else. Basketball goals surrounded the stage. There was also NO security, so any type of bootleg would have been easy to make (and if you've got one tell me.) Anyway, the opening act, You Were Spiraling, were decent, but most of the crowd reaction came from the covers they did of old 80's songs.

Here are the highlights of the show: They Got Lost was introduced, "this song is about a fictional band called They Might Be Giants"

Instead of chanting "People!" when the Dans play in Battle for the Planet of the Apes, we were all told to chant "DAN!"

Flans cautiously introduced Working Undercover for the Man, explaining, "The Man" was a slang word for The Establishment. He made sure everyone heard what they already knew.

The CD skip version of Shoehorn seemed to be added on the fly, with a short band discussion leading into it.

Vocoder/Ana Ng was the second best part. During the Vocoder part, Linnell went freestyle, he really seemed to be in a good mood tonight. Here are some quotes from the Vocoder section "$1500 Vocoder" "Expensive but worth it" "Only used once in the show, better get my money's worth"

S-E-X-X-Y just rocked all the way through, better than any version I've ever heard.

She's Actual Size was the highlight of any TMBG show I've seen. During the Drum solo, Flans disappeared behind an amp. When Dan was done, he started looking around for Flans, but he couldn't find him. It then proceeded like this:

"Dan, I'm hiding behind the amp, and I'm not coming out until you play more of that crazy shit on the drums."

(Another drum solo, Dan looks for Flans to sing)

"Dan, I'm hiding behind the amp, and I'm not coming out until you play more of that crazy shit on the drums."

(Dan starts another and is interrupted)

"Ah, yes. The people love the hi-hat, they can identify with the hi-hat."

It was all added on the fly, and even the guys on stage were cracking up.

Linnell handled the Spy Improv, singing along to the bands music with "Trent Lott Stole my hairstyle."

The Stick for Lie Still Little Bottle was, according to Flans, "Cut down from this very campus."

Even though its not on a printed setlist, they added in Mammal after a short discussion.

Linnell singing The Sign during Particle Man was hilarious.

Birdhouse was introduced with, "We have a friend. Yes, its hard to believe that we all have this friend, yes, TMBG, has a friend."

During the Bass solo in the Guitar, They made us stop clapping the beat with Dan, and he played it with no accompaniment at all. The Conga line lasted through 2 songs.

Afterwards, we waited half by the bus to get a glimpse of Them, but only Dan and John L. came out, carrying a pizza and L. said "Thanks for coming out guys, but we've got to deliver this." And left. Flans never showed up. All in all, the concert was incredible, and I snagged half a setlist, and Dan Miller's autograph. Also, Exquisite Dead Guy was on the Encore list, and they had the heads where you could see them, right in back of the stage, but they didn't play it. oh well.