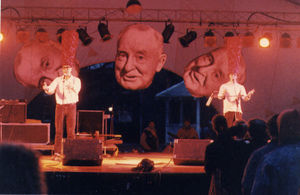 They Might Be Giants performing with carpet hats behind cardboard cutouts of William Allen White, 1988.

In the early days of They Might Be Giants, the band had multiple different props and items that made their appearances in live shows, early promotional material and some of the band’s early music videos. Sometime around November 1988, a majority of these props were retired in the interest of keeping the fans’ attention towards the band’s music. John Linnell mentioned the stripping of the props in a 1988 interview with Technician:

It was getting to be like a comedy act, where people just wanted to hear the punchline and didn't care about the joke. People just wanted us to bring out the props, and they would forget about the music. We want to showcase the songs. The props are meant to underscore and nothing more. The vehicle and not the show.

Below is an alphabetically ordered list of props, items and other material that have been known to appear in the band’s early live shows, photos and music videos.

TMBG did not entirely abandon the idea of props during their shows. In the 1990s, the band used puppet heads on poles to perform certain songs, such as "Exquisite Dead Guy" and "Counterfeit Faker". In the late 2000s, they created sock puppets called The Avatars Of They to use during certain portions of the show.