This article on They Might Be Giants was featured in the December 1985 issue of SPIN Magazine, written by Mark Dery. 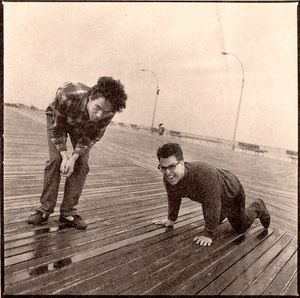 They might be Eddie Haskell and Lumpy Rutherford 10 years after, rigged out respectively with pearl-inlaid accordion and Japanese Strat. They might be, as The Bob suggested in a January '85 write-up, pop artists with a somber side, too easily typecast as loony tunesmiths. Or they might be those selfsame "mad boys" featured in a March '85 blurb that dared the reader to "go for a ride in the musical glove compartment of their glass-bottomed car" and, having choked down that mouthful of hyperbole, "expect to be driven insane."
And then again, as their press packet puts it, "All that They Might Be Giants was, they is." Uh-huh. One thing is certain: They Might Be Giants are so far off the beaten path that they're still trying to fold the road map—which is part of their allure. The two Johns (Linnell, on accordion, and Flansburgh, on electric guitar) who make up this musical duo are a far cry from the GQ crooners of today's airwaves.


Flansburgh's chemistry-major specs and terrified toothbrush of a crewcut counterpoint, Linnell's frowsy curls and rail-thin angularity. Together, the boys cut a striking figure. Onstage at Danceteria, the Pyramid [Club], 8BC, Darinka, CBGB, or any of the other dozen-odd nightspots they've appeared at in the New York area, They Might Be Giants aim to derange. The twosome yuk-yuk it up with monster mitts made of paper-mache, fence with loaves of French Bread, lead sing-alongs with oversized cue cards, and trade repartee with wisecrackers in the peanut gallery.
Watching Linnell pump an accordion any Armenian wedding band would envy and Flansburgh gyrate and wobble like some Gumby left too long in the sun, one can only conclude that this band is ... original. "The thing that creates movement is critics," points out John Linnell. "Everything that's worthwhile tends to be so idiosyncratic, it's almost useless to talk in terms of movements."
"Changing channels is our biggest tradition," mugs Flansburgh. "Lots of things are real private parties," Flansburgh adds, distinguishing between They Might Be Giants and a faddish bandwagon or culture club. He elaborates: "Look at our song 'Youth Culture Killed My Dog.' It isn't about whether we feel we're on the inside track or the outside track. It's about the horrible feeling you get from other people telling you that you're on the outside track. That's the whole point of scene—all these people feel bad, that's the problem."


The two Johns first met years ago at Lincoln Sudbury High School in Massachusetts (affectionately referred to by its adolescent inmates as "Drink 'n' Drugsbury"). Both worked for the school newspaper and shared an interest in music, although Flansburgh's technical abilities were limited to fiddling with reel-to-reel tape and learning guitar "one string at a time." Linnell, contrarily, was handling saxophone and keyboard chores for the Bags, a party band destined for anonymity (although their theme song, "Boogie With the Bags Tonight," lives on in Giants sets as "Giant Halloween Tonight").
In time, a seminal version of They Might Be Giants was born, with Flansburgh playing "Yoko Ono to John's John," as he recalls, stone-faced. After a brief hiatus in college They Might Be Giants reconvened in New York City, plunging into the murky waters of the club circuit circa '83. What about the name? "It's a nice-sounding set of words," explains Flansburgh, denying any tie-in with the film of the same name. "Some people think it's like 'Here Comes the Big Egos," he muses. "But I think they think it's funny, 'cause we're obviously nobody and hopelessly lost."


John Flansburgh: We specialize in really old, old ideas being brought out of the closet and dragged around for a little while...
John Linnell: ...and thrown back again.


As for the songs themselves, They Might Be Giants's hopelessly hummable numbers are masterpieces of pop pilfering, a musical mishmash of cowpunk, electro-boogie, blue-eyed funk, and oom-pah-pah (with the Jetson's theme stomping around somewhere in the mire). And it's that hopelessly garbled translation of other styles that hallmarks Giants music, suggests Linnell, pointing out that when the twosome cops a Cormen Miranda riff, for example, "It's not salsa that comes out, it's a cartoon of salsa. That's the part we enjoy." Flansburgh is quick to add however, that "It's not like we want to make fun of any kind of traditional music," but rather that reality pixillated, trash-compacted, and left for brain-dead is what They Might Be Giants are all about.


JL: I think our deepest concerns have to do with music we listened to when we were nine. That's very conscious. In my case, one of the records I often think about is this Walt Kelly record of Pogo songs. We actually cover one of those songs, one of our few covers. It's called "Lines Upon a Tranquil Brow." There's something really wonderful about the way the melodies on that record are put together. They're all extremely short, the melody's upfront, the words are hilarious. Those songs are the closest thing to the kind of stuff we strive for.


This is mostly Flansburgh's pet idea, that the words should never be dispensable. A random sampling of They Might Be Giants's verse: "All the people are so happy now, their heads are caving in / I'm glad they are a snowman with protective rubber skin / But every little thing's a domino that falls on different dots / And crashes into everything that tries to make it stop" ("Nothing's Gonna Change My Clothes"); "You'll miss me with effigies / Burning up your house like Xmas trees / As tears roll down below your knees / You'll miss me with effigies" ("You'll Miss Me"). Sketchy visions of things to come: the ever-elusive record deal, an extended stay in a rubber room modelling the latest in straitjackets, or, oddly enough, a puppet show.


JL: We just think puppets are kinda cool. We like puppets. Some of our best friends are puppets. We're puppets.