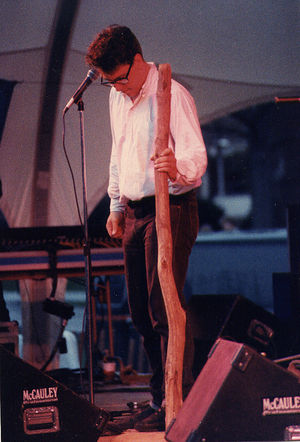 John Flansburgh playing The Stick in 1988 (photo by Stevie Rocco)
"Our most fearful nemesis—it's The Stick. Benevolent, but clinically insane. Omnipresent, yet alcoholic."

The Stick is a tall, thick, cylindrical wooden pole with an omni-directional microphone duct-taped just above the bottom. It is "played" by hitting the bottom against any hard surface, creating a sound similar to a bass drum hit. A small amount of reverb effect is added to further approximate a drum sound. The Stick has been an element of They Might Be Giants's live show since the late 1980s, when it was used to create the deep bass drum sound in live renditions of "Lie Still, Little Bottle". Often, for live performances, the song's arrangement is simply The Stick, John Flansburgh's vocals, and John Linnell on saxophone, accordion or another keyboard instrument. Though it was often played by John Flansburgh, between the 80s and 90s, The Stick was sometimes used for an "audience participation" portion of TMBG's live show. The Johns would call up a member of the audience to "play" the Stick for the song. In more recent appearances, John Flansburgh has resumed playing the Stick.

In response to a fan question in 2020, Flansburgh further explained details of the Stick:[1]

I have no memory of when the stick was introduced but I suspect it was with the introduction of Lie Still, Little Bottle into our set, which would have been between the first album and Lincoln--so 86, 87. Setting up the stick was a bit more business than you might assume, because it involved some electronic trickery. Very early on we had a dedicated microphone--as not to put the venues mic in the line of fire--and after a short while that mic was permanently duct taped to the bottom of the stick, along with a cable to the top of the stick. Soon there was also a dedicated piece of plywood to bang on. The signal of the bang of the stick was sent to either the house Yamaha SPX90 effects unit or the one we started to carry as the pace of shows picked up. The SPX90 was a very cheap, pretty versatile unit that included a gated reverb (yes, that big 80s snare sound in a pre-set) which made a big white noise kind of crunch sound and then clamped it off after a moment--think that Phil Collins In the Air Tonight drum fill. My guess would be that we started attempting the stick in a venue where we had time to do a longer sound check and a comfort level with the crew to figure all this out--like a [Darinka] or an 8BC, not the Pyramid or CBGB where bands really had to hit and split for sound checks.

While I have no recollection ever using a stage hook (which I am guessing would be the old fashioned metal thing stage people would adjust lights with) but maybe, maybe, we used one as a colorful alternate to the stick. Our pal Joshua Fried did do sound at CBGB on occasion in that era, in which case we might have attempted it, but in general sound checks at CBs were short and often kind of nerve-racking as the sound people arrived at the gig already at the end of their rope.

The Stick has ranged in size. For example, the current Stick is considerably taller than older Sticks. While its physical manifestation has changed over time, its fundamental presence in the mythos of the band has endured. However, The Stick is not known to have been used in any studio recordings.

The Stick is referenced in Gigantic (A Tale of Two Johns), where early fans relate how The Stick was a crucial part of the band’s shows at Darinka around 1987. It continues to make occasional live appearances to this day, and is often carried in the tour equipment truck even on tours when it does not make any on-stage appearances.

During the sound check for a 2018 Boston show, Flansburgh had an idea that the twelve foot PVC pipe used to roll up the band's stage carpet could fill in for The Stick and Lie Still, Little Bottle was added to the set list. The lengthy pole was used but found to be too heavy and unwieldy for a repeat performance.