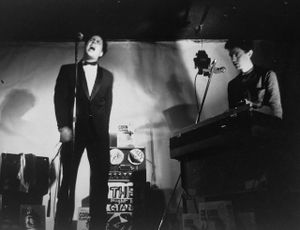 They Might Be Giants performing together at the Pyramid Club around 1983.

The Pyramid Club is a nightclub on 101 Avenue A in New York that first began operating in 1979. They Might Be Giants performed at the Pyramid Club various times throughout the mid-1980s.

Bill Krauss recalled the band's experience at the Pyramid Club in a 1994 interview with Myke Weiskopf:

When we started working at the Pyramid, six months afterwards, they stopped booking bands, but they kept booking us because we had been in at the early stage. It was really like catching the crest of a wave. The only reason that that was possible was because we had been working for a while, and stuff was ready to go when the clubs opened up.

They Might Be Giants performed various songs at the Pyramid, two of which being Now That I Have Everything as an opener[2] and Everything Right Is Wrong Again.[3] In the dressing room of the club, a short lived manager said to the band, “You must be into the eurythmics,” which inspired a line in the song Rhythm Section Want Ad.[4] In a mid-1980s Pyramid Club show, the band earned 75 dollars. John Flansburgh wrote a letter to his girlfriend at the time after the show: "Great news, we got $75 for playing at the Pyramid Club and [the manager] said we can come back any time."[5]

They Might Be Giants also performed a cover of Mr. Tambourine Man at a 1986 show, which the band advertised as “The Victory Show” on letters given to fans of the band, the fans were also told to bring acoustic guitars to the venue to perform the cover with the band onstage. The band’s last known show at the Pyramid Club was on December 17th, 1986.

Flansburgh mentioned the Pyramid Club in a 2011 interview with Vanity Fair:

Flansburgh: We would play the Pyramid Club but we were considered the “rock band.” We were the nice boys who had the rock band. Half the acts that played the Pyramid Club were transvestites and they were also all on heroin so...
Interviewer: And you weren’t transvestites on heroin.
Flansburgh: We weren’t transvestites on heroin. Even though we played with a drum machine. In the early days there was a lot more screaming in our shows. There was a histrionic quality to what we did.