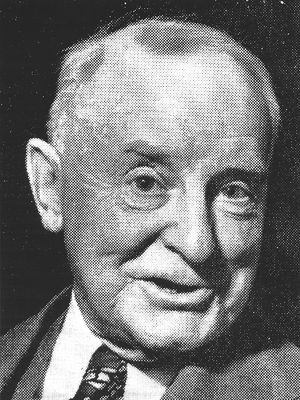 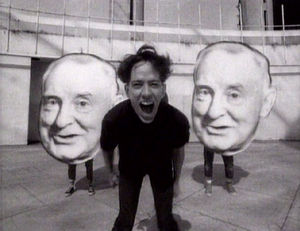 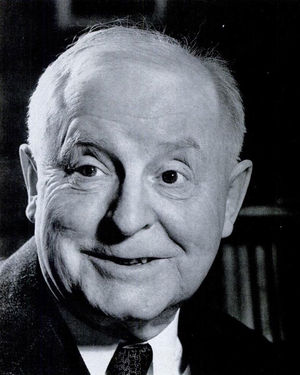 Another photograph of White

William Allen White (February 10, 1868 – January 29, 1944), a renowned American newspaper editor, politician, author, and leader of the Progressive movement, is the owner of the jolly, smiling face so familiar to fans of They Might Be Giants. In 1996, one hundred years after Mr. White's career-making editorial "What's The Matter With Kansas" was published, a group of 15 historians came to consensus that he was the most influential person in all of Kansas history.

Giant cardboard cutouts of the face of Mr. White can be seen at TMBG concerts, TV performances, and music videos. His face is also displayed prominently in the logo of this very wiki, as seen at the bottom of your browser.

Guesswork on what to call it was common before the identity was finally revealed in the early 1990's. A review of a March 1988 show in California refers to the head as "Harry Truman".

Over the years, TMBG has made many statements about William Allen White:

Exhaustive research reveals that he's William Allen White, known in his day as 'America's most famous small-town newspaperman.' Editor and Publisher of the Emporia (Kansas) Gazette from the 1890's until the 1940's. White's editorials were widely reprinted. He was best known for an 1896 editorial attacking perennial Democratic presidential candidate William Jennings Bryan and a tribute he wrote for his daughter Mary, who was killed in a horseback riding accident at age 17 (some of you may remember a made-for-TV movie about her life which aired about 10 or 15 years ago.) Although he was a life-long Republican, White was nevertheless a strong supporter of Woodrow Wilson's League of Nations and Franklin Delano Roosevelt's social and economic reforms. White died in Emporia on January 29, 1944. — TMBG Information Bulletin #1, Winter 1991

'He's no one famous,' says Linnell, 'just someone from the encyclopedia.' — Reflex, June/July 1988

'That guy' probably has a family or an estate or something and we don't want to alert them to the fact that we've been using his likeness in case they'd want to sue us. — John Linnell, tmbg.com Q & A

It's a guy who looked like Orson Wells, who we wanted to make our mascot, or logo, but we knew he would sue us, so we used a more obscure guy who has yet to sue us. — John Flansburgh, eMusic Q & A

He is William Allen White, beloved Kansan, small-town newspaperman and prominent progressive. His editorials in the Emporia Gazette won him the Pulitzer Prize. And a run for governor centered on a single issue: ridding the state of the KKK. — Vance DeGeneres in an Easter Egg from the Gigantic DVD

We didn’t really know who he was when we chose his photograph to be the unofficial face of TMBG. I think the choice was influenced by a performance piece created by the Swedish artist Öyvind Fahlström, which involved people marching down the street with giant portraits of Chairman Mao and Bob Hope. — John Linnell, Bearded Magazine

He's in the Collier's Encyclopedia - I used to actually work for Macmillan publishing. [...] So, I worked in the stat room and they had all the encyclopedias there, and so I just kind of pulled his face out from an encyclopedia and statted it up real big. [...] He's really not of any significance, we just liked the way his face looked. — John Flansburgh, 1992 radio interview