They Might Be Giants
Iron Horse in Northampton, MA
November 12, 1985 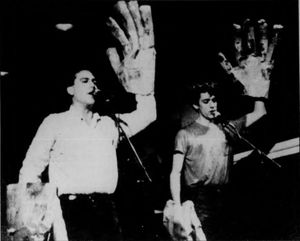 They Might Be Giants performing at the venue with big paper mache hands.

Going to the Iron Horse to see a band called They Might Be Giants, I was a bit anxious.

This anxiety was quickly calmed by the sober atmosphere of this humble club. The environment quickly changed as the crowd perked up once the happy duo of guitar player, John Flansburgh and accordion player, John Linnell, hit the stage. Although they were musically sound, the show became very jocular.
The combination of lyrics and stage props proved to be really entertaining and almost circus-like. They made their mark with such songs as, "Youth Culture Killed My Dog", "Cowtown", and "Nothing is Going to Change My Clothes".


Their stage props led to even more amusement with toys such as a square cardboard guitar, a lizard head, a large mexican hat and last, but most impressive, huge paper mache hands. The accordion, an almost obsolete instrument added to the frolic. The last song, "Number Three", involved the crowd in the show as they held up cue cards with the lyrics.


The only weakness of the show was the actual stage size and the sound. Both were limiting, and seemed to suffocate the performers. The players, who hail from Lincoln-Sudbury Massachusetts, are due back within a month. I would definitely recommend seeing them.