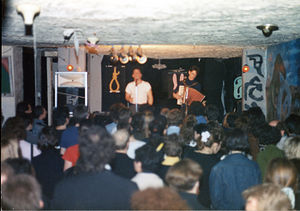 Darinka was an underground venue on 118 East 1st Street in New York that operated from April 1984 to May 1987, which They Might Be Giants played so frequently that they were considered the house band. The band also performed their Wiggle Diskette release party here on March 30th, 1985 and also met Adam Bernstein here, who directed the band's first music videos.

Gary Ray, an actor, stage director and musician, founded the club on April 21st, 1984 and named it after his mother. Ray first met They Might Be Giants at Performance Space 122 during the biannual Avant-Garde-Arama event in 1984,[1] and within two months of the club’s official opening, the band played their first show at Darinka on June 22nd.[2] TMBG would continue to play a monthly weekend show at the venue, and performed there nearly a dozen times in the year following alone.

They Might Be Giants wrote about the venue in a mid-90s newsletter:

Darinka was the site of some of our happiest moments in the mid-Eighties. It was a hundred or so occupancy club in the East Village. We played there almost every month for a couple of years, including a few times for New Year's. Like many clubs in Manhattan at the time, the set length there was very short. However, the Darinka crowds would often call us back for insane numbers of encores. Having played every song we'd rehearsed, we were sometimes called upon to play songs we had just played in the set over and over again.

On June 29th, 1985, the club was raided during a mushroom party by the NYPD for operation without a liquor license. Due to this raid, Gary Ray was fined and arrested, along with bartender Robin Clements.[3] To pay off the fine, a benefit for Darinka, which was titled "We Are Darinka",[4] was organized at 8BC with They Might Be Giants performing at the benefit on August 7th.[5] Following the raid, Darinka was forced to close, returning months later as a private members-only club. By this point the Johns were touring other venues more frequently, but did return occasionally to play.

In a Village Voice blog in 2013, the band talked about their experience at Darinka:

Flansburgh: We'd play a place like Darinka—which was literally the club owner's apartment—and he'd move his loft bed so you could play on the stage. That was kind of more typical for us at the beginning.

Linnell: It was a very intimate little scene. The crowd that showed up, everybody knew everybody else, or at least were familiar with everyone else there. John and I sort of thought of ourselves as the house band there, because we played there quite a lot, and the other things that happened on the stage were all generally performance art with a few exceptions. That was what mostly went on. it was very open-ended performance, which was often utterly abstract, sometimes extremely pretentious, and often really compelling and interesting. There were these wonderful performances where they'd involve this rhythmic chanting of stereotypical expressions and activities and it was very funny. The audience would laugh, because it was something everyone recognized, and it was kind of beautiful and abstract at the same time. In a way, we were what passed as ordinary—we were just up there playing songs, and a lot of the other acts were doing these really, very ambitious and groundbreaking kind of things. A lot of the stuff that was going on there went undocumented and has disappeared from the record, and it's really a shame. Some of the performers went on to be well known. Steve Buscemi was on that stage quite a lot.

The Darinka Archive at the Fales Library[edit]

The Fales Library located within the Elmer Holmes Bobst Library at NYU contains the personal collection of materials such as cassette tapes and photos Gary Ray saved during the years Darinka was active.

The Library holds four audio cassette tapes related to They Might Be Giants (in MSS.340 box 8). Some photos in the collection are of the band performing on stage, candid and posed photos of members of the band along with friends, such as Bill Krauss and Marsha Armitage of The Mundanes, as well as photos of crowds during TMBG shows.

The four TMBG tapes in the collection.

This tape, 1985 Promotional Demo Tape #4, has yet to be seen outside of this collection. It contains Nothing's Going to Change My Clothes, a unique version of She Was A Hotel Detective based off of the 1985 demo tape version but without the “ooh” vocals at the beginning and a noise solo in the bridge, and I'm Deaf which is nearly identical to the 1985 demo tape version except for the last 20 seconds of the song, where the drum machine level is lowered and continues through to the end of the vocals. The drums then return to full volume and continue with the pattern for an additional 4 seconds beyond the demo tape version.

This copy of the 1985 Demo Tape is identical to the Hello 1993 reissue, which contains rough mixes of the 1986 album versions of “(Put Your Hand Inside) The Puppet Head” and “Hope That I Get Old Before I Die”. Unfortunately, the first 30 seconds of Puppet Head are missing, likely due to an error dubbing this tape by the band. What makes this Demo Tape unique to all other known 1985 Demo Tapes is that after Rabid Child (the end of Side One), The Famous Polka (Demo) (identical to the Frank O’Toole version) appears, without mention on the J card.

Oddly, there is an extra J card in with the tape, which is similar to the 1985 Promotional Demo Tape #3 J card without Flansburgh’s writing below it.

Despite the labeling (“They Might Be Giants Interview for SAY"), the digitization reveals that it has no They Might Be Giants material on it at all, but instead contains answering machine messages left for Gary, followed by a random collection of other non-TMBG songs. The second side has strange experimental backwards music that goes on for about 17 minutes. If reversed and sped up, it’s just a guitar and a drum machine and does not sound like They Might Be Giants.

Among the answering machine messages, three are from John Flansburgh, and can be dated to roughly May of 1986, due to the content of the messages.

Hey Yo! Gary. This is Johnny here. Uh, listen. Um. Let’s talk again about this ad-thang. And, uh, just wanted to tell you that—you know—thanks for the show. And, um. Uh. What else did I want—there’s something else I wanted to tell you, but I don’t know what it is. But, uh, call me. Or I’ll call you. Look forward to talking to you soon. Bye Bye.

Gary. Ah, yes, I figured out what it was. It is “Stereotype” not “Stereotypes.” “Stereotype In Quad.” Um, that’s the title. Cause it’s all four of them doing similar things—all similar stereotypes. But it is “Stereotype.” So, DO NOT mail out anything with that thing on it. Also I wanted to talk to you about the mailing. Talk to you later. Bye bye.

Stereotype In Quad performed at Darinka in May of 1986[7].

Gary, don’t come tonight, I haven’t finished it yet. Um—just—This is John. Also, it’s not just “Chazz and James,” it’s “Stereotype In Quad” is the name of their performance. But—great message. Glad to hear you smiling through your voice again. Talk to you later. Bye-bye.

This tape has the audio from 1985 Promotional Demo Tape #3. It is possible that the extra J card in the 1985 demo tape should be with this tape instead, as it looks like the one from Promotional Demo Tape #3 without Flansburgh’s writing below it. The tape here looks like it was maybe dubbed by Gary or someone else, since it’s not a cassette TMBG was using at the time, and the handwriting doesn’t appear to be Flansburgh’s or Linnell’s. The really weird thing is that the J card for this tape is labeled “They Got Lost” and seems to have been written around 1985 or so, years before the TMBG song or compilation of the same name!