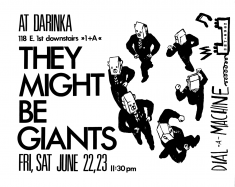 This performance was the pre-show for a performance of Swarming B-Girls, starring Karen Stroker and Britt Arbelius, which started at 1am. This was also the band's first time performing at Darinka.[1]

The poster for this show—and the show that occurred on the next day—was reproduced in a TMBG newsletter with the following text: