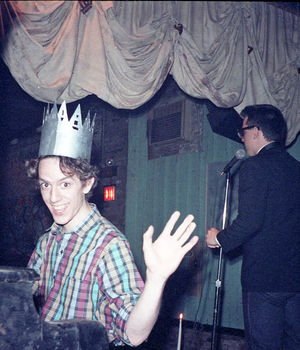 They Might Be Giants performing at 8BC for the Darinka Benefit, August 7th, 1985.

8BC was a nightclub, art gallery and performance space on 337 East 8th Street in New York that operated from October 1983 to October 1985. They Might Be Giants performed at 8BC various times throughout the mid-1980s and they also met The Ordinaires here.

Cornelius Conboy opened the venue on October 31st, 1983 with a four-hour variety show called Ucci’s Circus Romanus.[1] The first known They Might Be Giants show at the nightclub took place on June 15th, 1984, and the band continued to play numerous shows at 8BC throughout 1984 and 1985.

8BC was an amazing venue (located quite logically between Avenues B and C on 8th Street) The stage was actually the first floor of the build while the audience looked up from the collapsed, cleared-out basement. It was really the East Village scene at its height—with three or four shows a night including some quite elaborate performance art spectacles. There was a rabbit that lived on the stage that would occasionally steal the show at what was usually the perfect moment. For a few years they had a summer pig roast festival where they buried and slow cooked a pig underground. That seemed a little scary.

When Darinka was forced to close in June 1985 due to operating without a liquor license,[2] a Darinka Benefit, titled "We Are Darinka",[3] was organized at 8BC, with They Might Be Giants performing at the event. All of the money raised at the event was used to pay off the fine that was given to Gary Ray, the owner of Darinka, by the NYPD.[4] The last known show They Might Be Giants played at the venue was on September 27th, 1985, nearly a month before the closure of the venue.

On October 22nd, 1985, 8BC closed its doors due to never obtaining a Certificate of Occupancy to operate and violation of zoning regulations for the neighbourhood.[5] After the closure, a benefit for 8BC was organized at the Cat Club on November 4th, which They Might Be Giants performed for.

In 1986, from February 12th to February 15th, the cast, crew and artists of 8BC staged a reunion at The Kitchen to celebrate the club.[6] The event was titled "8BC Nights" and multiple artists performed there, including They Might Be Giants, who performed for the event on February 13th at midnight.

In a 2011 interview with EV Grieve, John Linnell was asked about his experience performing at 8BC:

8BC was like "The Little Rascals." They had this whole thing when they put on a show, the curtain was made out of like stitched-together blankets. Everything seemed really homemade. That's how 8BC felt. There was a big curtain they raised just before the band came on. The audience was in this pit that someone had dug out for the crowd. The stage was at street level and the crowd was down below. It was like a big, silly variety show. [8BC] did not appear to be taking itself seriously. But there was this enormous range of strange and interesting acts. We met so many people, some of whom are still dear friends.