This Adam Bernstein should not be confused with the Adam Bernstein that plays bass for The Laurie Berkner Band. To add extra confusion, that Adam Bernstein has a solo album on which Dan Miller and Marty Beller were guest artists.

Adam Bernstein on the set of "They'll Need A Crane" 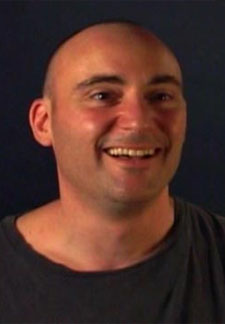 Adam Bernstein is a film and music video director. Some of his first film works were music videos for They Might Be Giants, and he was the director of many of their music videos from 1986 to 1992, including:

Adam met the band after seeing a show at Darinka at the suggestion of Mark Boyer. In 1989, he secured the band a few spots on Nickelodeon's Nick Rocks, which the Nick Rocks ID was put together for. In 2002, he was interviewed for Gigantic (A Tale Of Two Johns) and recorded introductions for a few of TMBG's early music videos in the DVD's Special Features.