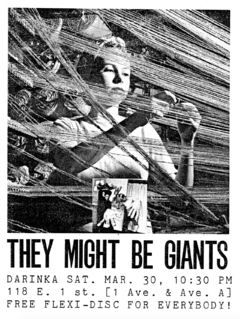 The release party for the Wiggle Diskette, the band's first official release.

Gary Ray, the owner of Darinka, was asked about the show on the Don't Let's Start fan podcast: "It was fantastic, [...] that flexi-disc party was huge, it was a really big deal."[1]

When asked about the show in a 2022 Tumblr post, John Flansburgh said:

It was just an excuse to play another show. It was a ton of fun and kind of exciting. I do remember the day of the show scotch taping flexidiscs to streetlights in the East Village along side posters. (the discs themselves were impossibly cheap-I think less than 10 cents a disc)