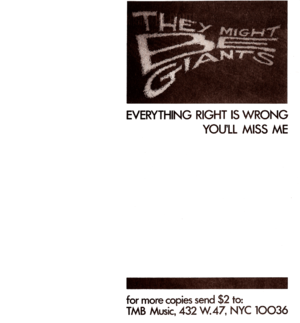 The Wiggle Diskette (as the record pronounces itself), They Might Be Giants' first official release, is a one-sided 7" flexi-disc (round, not square) released on March 30, 1985, produced by Bill Krauss, engineered by Al Houghton and Alex Noyes, and with drum programming by Chris Butler. The release was limited-edition of 1000 copies. The tracks included were "Everything Right Is Wrong" and "You'll Miss Me", both of which resurfaced in drastically rearranged versions on their debut album and Lincoln, respectively. The cover artwork features a photo of a young girl at a wool machine threading wool, with a small photo of the Johns at the bottom. Above, THEY MIGHT BE GIANTS is modestly printed. Some copies were distributed by stapling or taping bagged copies to telephone poles and street signs around Manhattan,[1] as well as nailing them to trees around Tompkins Square Park.[2]

To celebrate the release of the Wiggle Diskette, They Might Be Giants hosted a release party for the disc at Darinka. Due to the discs being cheap and easy to manufacture,[3] a majority of the people at the event were handed out free copies of the flexi-disc to listen to. According to Gary Ray, the release party was a "really big deal." [4]

The disc was reviewed by William Leith for New Musical Express on August 10th, 1985:

A world away from the savage bass-driven grudges, the hairstyle neurosis, the shoe-fear and shirt-searching and simply falling asleep at the mixing-desk that we're used to, this is two minutes of flexi-pop tricked out to look completely natural, like it didn't care, although I suspect that there's a lot of (hidden) studio microsurgery behind it. It's a miracle of compounded reference: twangy voices and wah-wah-gimmicks and burned-out psychedelia. "Your money talks / But my genius walks." This is it then, I suppose — the last word, the final vinyl.

I think it was in the middle of '84 that we decided we were gonna ask a friend to loan us a drum machine in order to make a record with, instead of with the real drums we had been recording with. I think the machine we used at the time was a DMX. Boy, I don't even know what's happened to those things now. It was state of the art then, and I listen to the tape now and the sound just sounds like one of those things that are attached to your parlor organ, like the rhythm, you know.