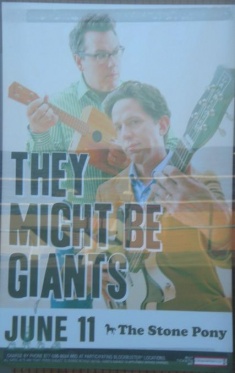 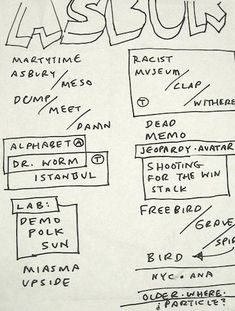 THERE WERE THREE ENCORES. Iggy gave me John's coffee cup. The show was basically the most fantastic thing ever.

Very energetic and fun show. Was a little disappointed by the prominence of children's songs (The only song they played from Apollo 18 was... Spider?), but was highly entertained nonetheless. Hearing James K. Polk in stripped down form with electronic drums was a treat. The lights complimented the songs in a big way... Withered Hope's chorus was highlighted by a disco ball.
No offense to the younger folk, but being in my early twenties I think I'd be more interested in 18 or 21+ shows from now on. Having what looked like two high school freshmen making out next to me for literally the entire show hampered my experience a bit.

THREE ENCORES! MARTY'S MOVED TO LUDWIG VISTALITES! DAN MILLER IS GOD! GOOD SHOW?! YES
After getting stuck in the Garden State Parkway traffic for three hours driving from Middletown, NY to Asbury Park, NJ, me, my brother, and his girlfriend finally arrived at the Stone Pony, to a really long line. Thankfully, Vvedge allowed me to cut him in line, close to the front! :P
The place was really small and cramped, but contained a lot of energy! I was about 3 rows back if you count people as rows, but TDK pulled me to the front before the second encore. I got a lot of great videos and pictures.
First off, Marty switches again! First DW, ddrum, and now transparent acrylic Ludwig Vistalites! They still sound sexy as hell, and the bass drum logo is now the 8 bit TMBG logo! They also switched the logo on the marching bass drum.
Tons of awesome surprises throughout the show, specifically, Curt Ramm rocking his trumpet, electronic James K. Polk, Dead, Your Racist Friend, Museum of Idiots, Where Your Eyes Don't Go, and Spider. Also, HOW ABOUT THAT NEVER ENDING CONFETTI CANNON DURING OLDER?!
One of my favorite pieces of banter was The Avatars Of They claiming they were cut out of the movie Avatar, and even demonstrated a few scenes they were cut out of!
Also, can't forget, the band member acknowledging. At the very beginning of the show, Marty Beller somehow picked me out of the crowd, we exchanged a few facial expressions, I gave him a thumbs up, and he gave one back, and proceeded to rock the shit out of his new kit. :D And during Memo to Human Resources, I panned my camera to Danny Weinkauf for a split second, I smiled at him, and he smiled back at me. During the Rabbi Vole solo in Doctor Worm, Flans played right in front, closed his eyes, and I screamed really loud. He opened one eye at me really confused haha.
But my favorite of all, was during Particle Man, during the I Love To Sing section, John Linnell looked right at me, and pointed at me every time he wanted the crowd to sing. I felt so awesome! I was recognized by one of the best songwriters in the world!
I also made a shirt that said "DAN MILLER IS GOD", but I don't think any of the band members read it haha. Iggy read it, and he seemed to like it. I asked him if he could get Dan for me, but he said Dan had his own schedule.
Overall, awesomely fun show. Fans were singing along, setlist was amazing, I just had a blast. Also not to mention, I met up with a ton of wikians! Too many to list, but you know I saw a ton of you. I also got a setlist and one of Linnell's empty coffee cups. There's no way I can describe how freaking amazing it was. Holy god. <3
Pics/videos soon. Happy 51st Birthday Linny!

Never before has my ultimate mortality been conveyed to me by a seemingly boundless flourish of confetti. Never before have I applauded hand puppets for their euphonious musical stylings. And never before have I envisaged a universe in which our glorious sun, and it's commonly recognized properties were mere artifacts in the bewitching chantings of those villains who roam the high seas of Earth, and perhaps the outer reaches of space.

This show was a lot of fun. i was so excited to hear "Museum of Idiots", "Meet the Elements" and the Pirate version of "Why Does the Sun Shine". It was great to see some of my fellow TMBG friends who I haven't seen in awhile or finally met in person. Also, a special shout out to the three guys who waited for Flansy after the show for two hours with me!

Awesome show, which I can only assume was a Bonaroo warm-up gig. No opening act, which meant we got right down to business in a timely manner, and the band also played an extra-long set- just a hair shy of two hours! They also played three encores, very rare indeed.
The Pirate version of "Sun" was apparently improvised, and a highlight. "Where Your Eyes Don't Go" is a favorite song of mine and I love when they stick in forgotten songs from the early albums. The band was in their new 2010 formation with Linnell to our left, and all the new show elements I've heard about were included- the puppet ("Avatars of They") segment, the new confetti cannon, Marty's electronic drum kit interlude. Kurt Ramm, from Springsteen's recent tours, was there on trumpet which adds a lot to many of the songs- "Your Racist Friend" and "Withered Hope" sounded particularly great. If there was a negative to the show, it would be the usual: we counted 5 special shout-outs/showcases for Marty Beller. Yes, he's a pretty competent drummer, but we don't need to stop all proceedings to scream for him 5 times in every show.
Finally, a note to the kids: you don't all need to photograph or video-record the concert. It seemed like there were a hundred cameras in the air throughout the night- put your phones down and enjoy the show!