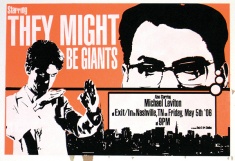 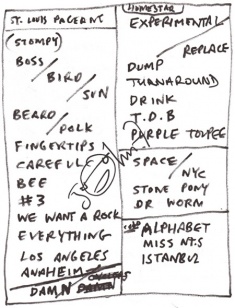 Recap by woodsie22 on the TMBG LJ

The show was amazing. The opening act was very funny and fit perfectly. Michael Leviton's love songs, played on ukulele, were hilarious and he said that TMBG audiences are always the best audiences. And he said that he could only open for a band like TMBG because usually just going on stage with a ukulele is suicide.

A good 30 minutes after Michael left the stage, TMBG bursted on! TMBG started the show by playing Boss Of Me. The songs were way more "rocky" live and the Johns were hilarious. They made plenty of jokes throughout the thing. Like how this tour is for a new album that they are NOT promoting. My favorite line of the night came from Why Does the Sun Shine? when Flans said "The heat and light from the sun are caused by the nuclear reactions between a failed foreign policy, a failed domestic policy, and a failed presidency!"

There was a suprise happy birthday song for Flans and a cake was brought out. After Flans blew out the candles and complimented the toy car on his cake, he said that he was afraid for a second. He said he didn't know what Linnell was playing and that he had finally lost it. "I knew it would be St. Louis when he finally lost it." They messed up the setlist somewhere and backtracked to play Fingertips.

There was audience participation with cell phones and screaming on some songs, the Johns gave introductions to almost every song, Flans made fun of C.C. Deville (of Poison), and they kept making sure they played songs specifically from the first album. They did two encores and both of them were amazing. The "Space Jam", as the set list calls it, was Marty and Linnell doing a technoish song. The last song of the night was Istanbul (Not Constantinople) and it was fantastic. It was a classical-sounding solo that got progressively faster and more and more awesome. After the show I was able to get Marty, Danny, and Flansy's autograph on my Venue Songs DVD. I have been to a handful of concerts, and this was easily the best.

Yet another amazing show! Michael Leviton was a great choice for the opener, despite our initial fear of a guy with a ukelele singing nautical themed songs. The wait between him and TMBG coming on stage didn't seem bad at all.

My sister, my boyfriend and I all voted on one song we really wanted to hear, and my sister and I got our wishes (Dr. Worm and Istanbul, respectively). Basically, though, they played pretty much every think I could have wanted to hear, without them playing every song they've ever written. :) And, in keeping with tradition, my sister and I tried to get a conga line started at one point, but failed miserably; luckily another one came by and we jumped on that one. :)

This show goes down as my best TMBG concert to date. My friend Christy and I got there too late to get a foam TMBG hand - and then ended up sitting next to an awesome guy named Joe who gave me his! Joe - YOU ROCK! Michael Leviton was a great opening act (I still remember everyone calling for the girl who was with him who played the glockenspiel "GLOCKENSPIEL!"). The show was just downright magical for me. I've never seen Linnell more cheery and engaged with the crowd, he had a smile on his face from beginning to end, it was awesome. And of course, Flans' birthday! Seeing his genuine surprise at the cake was great. This show marks my very first ever TMBG Congo line - I've never had the nerve to join up before. And hearing all the songs from Flood and earlier was awesome.
And the very best part!!! After the show, we hung around outside just for the hell of it - and all the guys except Linnell came out to sign! I got all of them to sign my foam TMBG hand, and I even got to get my pic taken with Flans and to give him a hug and wish him happy birthday.
BEST CONCERT EVER. :D