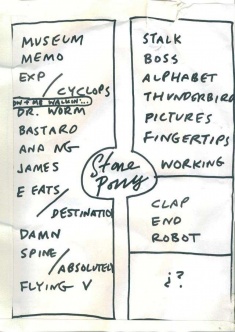 They Might Be Giants
— with Spiraling, Sarah Vowell, Venue Songs opening —
The Stone Pony in Asbury Park, NJ
May 13, 2005

This was an awesome show altogether, Sarah vowell was awesome, and it was my first TMBG concert so it is very important, and the set list was amazing, better than I could have hoped for. It was the best day of my year.-MH

This was a really really good show. The set list had a bunch of surprises (for me anyway) Absolutley no complaints here EXCEPT---

WHY wasnt the slow Asbury Park but infinitely more importantly, the incredable rendition of Twisting included in the downloadable show?!

oh, and spiraling (the opening band) was terrible.

This is a review of the downloadable audio offered on the site. When I am considering shows to download, I consider three things: Venue/show's personal relationship (I went to the show, I live near the venue, it's my favorite venue etc.), set list (good songs, rare occurances etc.), and recording quality. Dan Miller, in his recap, usually mentions the quality of the recording briefly. Those are what this review focuses on.

The audio quality of this show full and clear with a good mix and no clipping or cutting out (a problem on their early show downloads). It's a bit clinical for me, I like my show downloads to sound a bit more like shows than this offers. There's nothing like really hearing audience applause, and this show leaves a bit to be desired in that arena. But, that aside, the recording quality is consistently good and very enjoyable.

The number one thing I look for in these show downloads is a good set list with lots of either rare occurances or songs that I really love to hear. This show is jam packed with them. You can see that for yourself. Aside from the performance of venue songs, there is a smorgasbord of selection. Sarah Vowell does the introduction to the Venue songs to great effect. The band is in good form without a lot of clams. Definitely a good show.

All in all, this is a great download and well worth the ten bucks. Good sound, good songs, good energy. How can you go wrong?

Good good fun!! We haven't been playing out a lot recently so each gig has that crapshoot style. It's amazing what I can forget after even a weeklong break. My muscle, head-cut-off memory is not what it should be. However, at this show we all seemed to remember that we're a band. Sarah kicks off the night with a spirited rendition of the Venue Songs Libretto. Fresh off her national book tour, her pipes in fine form, she brings the first female perspective to what has previously been a men's only narration. Great Job- Sarah!!

After a short "where did I leave that cup of coffee" break the band returns. It seems that the Stone Pony wishes it were an outdoors venue. Our last gig there in 2004 was highlighted by a bag-covered trashcan in front of the stage that collected the rainwater pouring in from the leaky roof. This time the emphasis was on fresh air as the back of the club was laid open to allow large amounts of salty and chilly sea air to freeze those standing in the back. I'm thinking about roasting marshmallows for the band's next camping trip out to the Jersey Shore.

Beyond the badge earning conditions, this was a great show. A kind of twisted set list that contains the usual favorites as well as some special guest songs like Destination Moon, Absolutely Bill's Mood, and End of the Tour. I'll try to get a sample up before too long - check it out, this one was a keeper.