From This Might Be A Wiki
< Shows
2 wikians attended: Dalis Jolkow 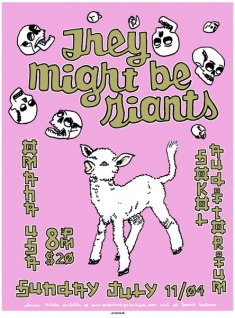 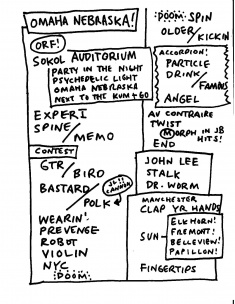 Before the show
The Dans could be seen bustling around the bus and fetching dinner. Flans was seen leaving the auditorium and entering the bus. Only one person said hello to him. Both guys and gals were searched and patted down. The historic hall was clean and air conditioned. I bought The Spine, and a t-shirt each for my son and daughter. I felt real bad about not bringing them, as they are fans themselves. It didn't occur to me that it would be an all-ages show until I saw a few kids running around, aged four to fourteen or so. I still haven't told them that kids were present.

Corm Mo was an odd cross between Elvis, Meatloaf, Freddie Mercury and Sam Kinison. He was funny, but quite the potty-mouth. He really had the audience going with his story of working a lame job with people he hated for seven years so he could learn the accordion and live his dream of touring with the Johns. He urged us all to do the same and then began playing, "We Are The Champions" by Queen.

Photos
I took some photos was a one-time camera, but they turned out so crappy, I won't even bother scanning them. I saw lots of people there with digital cameras, so please send me some picks, Omahans, if you happen to read this wiki.

After Memo To Human Resources, John Flansburgh said that they had come to the part of the show where they had a dance contest. He said that people in this part of the country were a tad more conservative than back home in New York where people are a little bit more loose and like to actually dance at rock shows.

Earlier in the day, they had visited the Nazi memorabilia shop up the road, as all other shops along 13th street were closed on Sunday. In his hand he held a Snap-Tite model of Cornelius, a character in the Planet Of The Apes movies. This seemed to me an amazing tie-in with their show, however, they didn't perform on of the Planet of the Apes material.

The heat of the sun is caused the nuclear reactions between the following surrounding towns:

Security quickly cleared the hall, including people waiting at the stage for autographs. My wife and I waited outside with about 15 other people hoping to greet the band. Some guy handed me a perfect photocopy of the band's set list. Dan Miller was hanging out waiting for someone, and after a while it seemed like neither John was coming out. My wife, a musican herself, took the opportunity to thank Miller and handed him a copy of her demo CD in the hopes that maybe he or someone else in the business could take a listen. Gradually more and more of the waiting fans went home and we waited with another guy hoping to say hi and get his Gigantic DVD autographed. He finally asked a woman who was entering the bus if they would be coming out to visit. She entered the bus and came back out a few minutes later saying, "No chance. They said to come to the Columbus, MO show".

Summary
In all, I enjoyed the show. The musical performance was quite good, and the show was performed well. I was disappointed that I didn't get a chance to greet and get my Bed, Bed, Bed book signed. I think Omaha is a cozy little venue placed in such a way to draw a reasonable crowd of TMBG fans. I hope to see them again soon in Omaha or Lincoln, and I will be sure to bring my kids.

This was my first TMBG show (I've been a huge fan for only the past year-and-a-half, since I received the Dial-A-Song anthology as an early Christmas present in December 2002), and I could barely contain my excitement. The ground floor was standing-room only. My mother (who had bought the tickets to this show as an early birthday present for me) and I had arrived early enough that we were able to stake ourselves a good position in the 2nd row, just to the left of Linnell's keyboard.

Opening act #1: Common Rotation (from NYC), 8-8:20 pm. Great sound, great harmonies, cool and funny lyrics; this was their 1st Omaha show, and their 2nd tour with the Giants. Consists of 3 guys: a lead singer (who commented at one point that Sokol "was the only venue we could find that isn't owned by Clear Channel!"), a singer-guitarist, and a guy who went from 2nd guitar to bass to trumpet.

Opening act #2: Corn Mo (origianlly from Texas, lives in Brooklyn), 8:25-8:55 pm. Solo act, mentioned that his real name is John, that TMBG are his heroes, and that this was his 1st Omaha show. Paunchy guy in a white suit, plays the accordion; still not sure what to make of the guy, but my first impression of him was that he was like Meat Loaf-meets-Weird Al.

"The Guitar", during which they held a front-row dance contest; the winner received a Planet of the Apes model kit.

Before going into "Wearing a Raincoat," Linnell jokingly suggested listening to the new album (which, believe it or not, was being sold at the merchandise stand 2 days before its scheduled release date) between songs so we, the audience, could familiarize ourselves with the new material.

Flansy lip-synched the bridge on "Prevenge" -- it was sooo funny!

Before "Violin", Flansy explained that they would be having us do a "wave" midway through the song, and he had us go through it a few times to make sure we would get it right. He commented about how strange it was to playing a gig on a Sunday, "a day of temperance," when they were so used to playing for drunk people most of the time. So then band went into the song, and we did "the wave"; Flans said it was "totally perfect", the first time during the tour that a wave had been so well-executed.

SPIN THE DIAL! Flansy took a vote as to whether he should start at the left end (with "the Christian rock and the NPR") or the right end ("with the light jazz"). The right side won (whoo!), and Flans first stopped at a hip-hop/R&B station; I didn't recognize the R&B song that was playing at the time, but he just made up a little tune: "I'm singin' like the guy on American Idol..." He passed over Pat Benatar's "Shadows of the Night" (Retro 106.9, '80s hits) and Paul McCartney's "Maybe I'm Amazed" (CD 105.9, "classic rock"), finally landing on Super Hits 99.9; the Rolling Stones' "Brown Sugar" started up, and he broke into a huge grin. He shut off the radio, and he and the band performed at least a verse and a chorus of the song. (I found this especially comical, since I've read somewhere that the Johns don't even *like* the Rolling Stones that much.)

Before Linnell went into "Au Contraire", Flansy (I *think* it was him, anyway) warned us about the use of French words in the song and said, "We know that's controversial ... among people who don't think things through."

After "John Lee Supertaster", Linnell mentioned that this was the first time TMBG had ever headlined a show in Omaha!

On "Why Does the Sun Shine", Linnell did the singing, and Flansy did the talking parts; at one point he said something like, "The heat and light of the sun come from the nuclear reactions between Elkhorn, Fremont, Bellevue, and Papillion!" -- HUGE cheer from the crowd. (Well, he mispronounced Papillion, but we all knew what he talking about.)

"Fingertips", the one song I wanted to hear more than anything!! Featuring Miller and both Johns on vocals.

My feet hurt, my back was killing me, and I was feeling so hot and dehydrated I thought I would pass out. But I couldn't care less, because I had seen MY FIRST THEY MIGHT BE GIANTS SHOW, and it was AWESOME!!! The Johns were SO funny, and SO full of energy. Linnell was all smiles throughout the show (and *what a smile* on him!); he looked like was *really* into the whole thing. And just *watching* Flansburgh as he moved about the stage, I got exhausted.

Mom and I spotted the Common Rotation boys behind the merchandise counter; we had been so impressed with their set, we asked them to autograph one of our ticket stubs; they complimented the Bob Dylan T-shirt I was wearing, and they were further impressed by the fact that the first rock show I ever attended was a Dylan show. At that point, although I happened to have some money with me, I hadn't planned on buying anything -- but Mom pointed out to me that Flansy was behind the counter, helping to sell some TMBG stuff. What a surprise! I hastily shelled out $20 for an extra-large Indestructible Object T-shirt; Mom suggested that I ask for his autograph right then and there, but Flans informed me that he wouldn't be signing anything until people were done buying stuff. I thanked him then, and Mom and I waited a bit until the merchandise stand closed.

We got in line for autographs and pictures, and when Flansburgh got to us, I stuck out my hand and said, "Pleased to meet you, finally." He shook my hand and said it was nice to meet me, too. "Excellent show," I told him -- and HE thanked US for coming! He signed my Dial-A-Song anthology booklet, and he put his arm around me so Mom could take a picture of us. He was so incredibly sweet! He may come across as a larger-than-life rock god on the stage, but in person he can be quite nice and down-to-earth. A perfect end to a perfect evening.

The tune "Sokol Auditorium" is an instant Disco Classic - often reprised over the course of the show. This gig was in a Polka Hall and if you looked over our heads you could see the Polka Hall of Fame Memorial Plaque starting in the early 20s up to present day.

My take on this gig is that the band has relaxed into the tour - still clam-tastic, but there's a pacing and "gelling" that only happens to a group after they've been out for while. If you've ever been in a band then you know what this is about. It may not be noticeable to the crowd, but the stage feels less nervous and more confident.