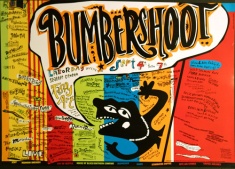 They Might Be Giants
— with Harvey Danger opening —
Bumbershoot Festival in Seattle, WA
September 6, 1998

The giants were the main act after Harvey Danger. Harvey Danger seemed pumped about the giants coming up next, I actually saw them backstage watching. After HD finished the crowd cleared out of the huge rock arena and I was able to move to the front to see giants. It wasn't for another hour that the giants would come out, but during that hour TONS AND TONS of people filed in. It was packed. I had thought there was alot for HD but the whole place was slammed and sold out! the way bumbershoot works is there are concerts all day and you pay at the gate and go wherever you want all day. It seemed everyone wanted to see the giants— The show started finally and it went very well. I was sitting at first but after awhile I just had to get up! Then during "The Guitar" A long conga line flew by me, it went on through out the song and then Flansy noticed and started singing "Everbody conga!" (the band kicked in right away "I'm not f**king kidding—grab a partner, make new friends—guy in the balcony conga...." and so on. I later learned from my friend that the show in oregon two days later the same thing happened BUT my show we started congaing before he sang, so I believe the conga originated at the bumbershoot festival. Then sadly the show ended with Flans saying they had time restraints but he wished he could continue. then it was over. Fantastic show. a little sidenote on it: That night Harvey Danger and tmbg went bar hopping together thus spawning Flasburgh directing HD'S private helicopter video.

Ok, I didn't technically attend this show. However, it was live-cast via cutting-edge RealPlayer™ streaming, which I attentively listened to in real-time. So I guess I technologically attended the show.
The setlist was pretty remarkable, marking the first time I'd ever heard Window and Subliminal performed live.
There was also a pretty funny bit of banter when someone in the audience apparently heckled the band while they were introducing Why Does the Sun Shine. Flans told the heckler "It's cool. We come in peace. We know what open hostility is like... We live in Brooklyn."
Earlier in the show, while introducing Mammal, the Johns joked that a guy in the audience was actually Flans's dad. Linnell quipped, "That's Earl Flansburgh. He's at every single show. Security! Get that guy outta here!"