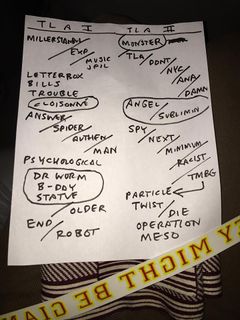 This show was a truly interesting one for me as it was the first show I had waited in line all day for. Well, I say in line all day. CapitalQ was gracious enough to give me a ride to this show.

We showed up at 10 AM after a 2 hour drive from Brooklyn, chilled outside the venue for a while, then were told to leave a few hours after because the TLA staff "was getting complaints from the neighbors" so they told us to come back at 5 PM to wait on line. Because we were the first in line, with the fast lane tickets we had, we were also the first ones into the venue.

I stood smack in the middle of the front row, right in front of Linnell's keyboard. The stage at TLA was not as tall as the one at the Music Hall of Williamsburg, where I had seen them the most, so it was a surprise to actually be able to see what was going on on top of the stage since the keyboard stand wasn't totally obscuring my view (I'm sure being 6'2 helped me as well in this case). I was in Linnell's direct line of sight which led to lots of probably indirect staring. It was really cool nonetheless.

I knew this was the show that was going to be streamed online for the IFC and the deluxe buyers of Phone Power so knowing I was going to be front and center in the venue, I wore a bright red shirt and made it a point to be as energetic as I could. This ended up working because there were many points in the stream video where you can clearly see me. After about an hour of bouncing around non-stop, I started to feel a bit faint (I thought it was because my blood sugar was low but it turns out I was just dehydrated) so I toned down the bouncing around and the flailing of my limbs for the rest of the show.

I've said it for other shows so I'll just end this by saying that SO FAR, this is the best show I've been to. Also one of the most diverse set lists I've experienced in person.