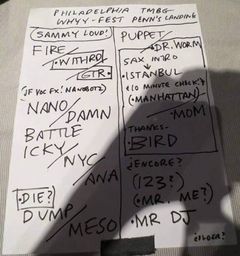 Well, I'm not sure if I should say this, but whatever. During Birdhouse someone in the crowd was doing some thing that really PO'd Dan Miller, so his put down his guitar, yelled at the guy, and called security. Then, after birdhouse ended, Marty played a long drum solo to tide over the fans until everyone came back for an encore. When everyone in the band returned Flansy said "Swear words are the only words we can use to describe how we feel right now." Then it went on a proceeded.