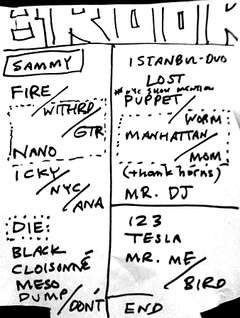 When the band eased into "New York City" for their seventh song, I knew this show was different. The tune is usually reserved for encores, especially when performed in NYC. And then the band made one of the most inspired segues I've seen, injecting the into its finale the crashing chords of "Ana Ng," effectively reacquainting NYC with its '64 World's Fair. The Triceratops Horns returned for another typical late-set tune, "When Will You Die," and it was interesting to watch parents dancing with their children in the aisles to such morbid lyrics. The horns departed once more, and Flansburgh shared some advice from his father: "Whenever you're performing in front of 10 to 13,000 people, do not play a new song." In defiance of his dad, Flansy unveiled a new, rocking version of "Black Ops" with JL on bass clarinet. Linnell held onto the instrument for another Flansburgh-sung tune, "Cloisonné." At its end, Flans led a crowd chant of "Bass clarinet!" that began to pick up steam. Linnell attempted his own refrain of "The cheese stands alone!" but it didn't take. While "The Mesopotamians" is far from my favorite TMBG song, I found myself singing along as I marveled at the lights, which were on point the entire show. Dedicated to all the apartment-dwellers, "We Live in a Dump" followed, my first time seeing it live. And then "Don't Let's Start?" Damn, They were not messing around.
Full review: http://www.drypaintsigns.com/2013/08/they-might-be-giants-treat-brooklyn-to.html

Great show! I loved that they took the seats out in the front this time! I Grew up right down the block, and have been to all of their bandshell shows. Always run into friends, family, and this time even some workmates.
And, I have to agree - the NYC -> Ana Ng was incredible. The disco during Guitar was also a highlight! And big props to Moon Hooch, they rock hard.

Really cool show, high energy. Was lucky to stand near the front of the stage. When TMBG came on, only Dan took the stage and started playing the main rhythm riff of "You're On Fire". All the other band members didn't make it out until about 15 seconds as they now got on stage and then performed "You're On Fire".

Flans introduced TMBG, and the light above our heads were eventually turned on so that we could see better. The "Sea of hands" was issued during the banter. He then introduced the Tricerachops Horns with Curt, Dan, and Stan on the trumpet, trombone, and sax respectively. They stood at the front and played "Withered Hope", which sounded an awful lot like the studio version.

Before "The Guitar", Flansy introduced this next song as being "The song to do dance to". This was meaning that they were holding a dance party for this portion. The actual opening was played, and a disco-esque jam was played during the breakdown with all the band members doing a solo simultaneously!

Flansy introduced the next song in a robot voice. Kids expected "Robot Parade", but I actually expected "Nanobots", and therefore I was right - they played it.

Although children's music was not to be played in the show, this was billed "All Ages". However, Flansy introduced the next song as "for the sexy people", much to his embarrassment as this was a family show but they kept the curses down to "Damn Good Times". Not on the setlist but was played.

Miller broke out the melodica for the next song. Flansy explained that the melodica was bought from the Sam Ash music store as their new piece of equipment. They placed Icky, complete with Linnell just on vocals for the song.

During "New York City", Flans flubbed up some lyrics during the "We met in the springtime at a rock and roll show" line. However, majority of the lyrics were accurate from the studio version BUT THEY NEED TO BRING BACK HOW THEY PLAYED AS THE ALBUM VERSION IN LIVE PERFORMANCES NOW!! Flansy sang "I held your hand, you held mine"!, and "The empire state where Dylan lived"!

The band continued to pogo into the 2012 version of Ana Ng, and finally the studio-sounding version of "When Will You Die?"

They blasted through The Mesopotamians, then We Live In a Dump, and the good part "Don't Let's Start'.

Linny finally broke out the accordion to play Istanbul the 1980s manner with a very long "Take me back to Constantinople". Linnell did the humming while Flansy vocalised the "Ohhhh oh, ohhhh..." from the album version.

The band returned for "Lost My Mind", then Miller took the keyboard for Puppet Head. However, one bad thing happened in the audience when the song started - some woman was in physical violence and some guy was protecting lots of people. She was trying to grab people and allegedly touch them. She must of have been doing that because she was intoxicated? Well, she must have been detained so the song was just awesome. Trust me I didn't miss anything!

The horns returned to the stage to close the show with "Doctor Worm", "Call You Mom", and the two highlights of the show - I'll Sink Manhattan, and Hey Mr. DJ!! (Flansy on Hey Mr DJ: "The song with Mr. in it"

The band went back for only one encore, only to see just the band intros before closing the set, starting off quiet with Tesla. Then the energy picked back up for the horns to return to stage to close the show completely this time. Flansy introduced the next song as "another song with 'Mr.' in it". They played Mr. Me, and finally closing with Birdhouse.

The show finally ended, but I didn't get a setlist!!! Grrrr!!!

Oh, well. It's fine. This will probably my last time I will see TMBG for a while. I have been in process of being a fan of other music artists. But I am mostly a EDM/Dance/Trance/House/Hip-hop/R&B/Eletctro/J-pop lover to the music industry.

I didn't even get home until 1 in the morning but that's fine, a nice relaxation overnight of the weekend of my summer break prior to my final year in high school and being at the age of majority.

Kinda late on this but I really enjoyed this show