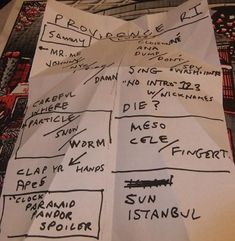 They Might Be Giants
— with Jonathan Coulton opening —
Lupo's Heartbreak Hotel in Providence, RI
March 9, 2012 at 9:00 PM

The bridge to "Snowball In Hell" was exceptionally drawn-out and strange here. Flans notably flubbed part of "Cloisonne" by repeating part of the lyrics, and remarked afterwards that he was having a "meta" moment, losing his concentration right as he was singing about losing his concentration. The improv section of "Spy" was pretty crazy too, with John Linnell narrating a bunch of weird stuff about the big band era in between the freaky jamming. All in all they slammed through most of the songs pretty quickly, with relatively little banter. John Flansburgh is still talking about "floordrobes" too, apparently...

This was a high-energy, fast-paced show, which is sort of a departure for the band (at least as many shows as I've been to...) but not necessarily a bad thing. The show really benefitted from being at a GA venue, and I sort of think that this is the best place to see Them. Theatres with seats are nice and orderly, but standing-room gigs are just the best - it's not only a throwback to the time when They played small clubs, but it lets the audience have more freedom and get hassled less by "the man." A+ show, and really glad that I caught Them on the swing back home at the end of the tour.

Memorable tidbit: Flans was particularly taken with this crowd's delivery of "DAMN!" in Damn Good Times, and led us in a few post-song recitations, "so we can sample it and play it back at other shows". Also, a blisteringly fast rendition of "I Feel Fantastic" by JoCo et al.