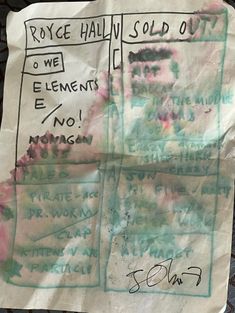 So, the intro was "O We" which really surprised me but actually makes a damn good intro. Flans said that they were excited to be back at Royce Hall, "it's been two years and it looks like in that time some people have been born. So we've come back to set the record straight."

The first song they actually played was "Meet the Elements" which I was damn excited about, cos that's my fav kids' song and the one I was most hoping they'd do. Towards the end there was this long pause, and after Flans said, "That part in the middle when everyone stopped playing, that scared me." John said, "I liked that part. That was my favourite part."

During one of the choruses of "E Eats Everything" Flans said "like children." I know he meant "similar to the way children will eat everything" but it amused me cos it could also be "including children."

Flans asked John to explain what a nonagon is, which sent John into Professor mode, which was of course VERY HOT. He was like "A nonagon is a polygon" and Flans said "You lost me when you said 'is a.' Is that one word?" Then John said that a polygon means a shape like a square or a triangle but a nonagon has nine sides "as the name implies." Flans asked "Why does the name imply that?" and John said "Why, why, why" but wouldn't explain. Then Flans said he thinks the name implies that nonagons are invisible because they're "not there." John said "That's right" and Flans said "It's important to have a rich imaginary life when you're in a rock band." "It's also important that we agree with each other about stuff," John added.

Flans said he knew people had noticed that the songs were getting shorter, and that the next song was only 34 seconds, so everyone needed to make up for it with massive applause after. "We've never played for so many powerful show business insiders under the age of ten." Then they played the non-extended version of "Boss of Me," then Flans said "Here's a new song we've been working on the last few weeks, it's called 'Meep'--meep. Here's another new one--*clicking sound*" John asked if they could have songs that were negative two minutes long, and after the next song Flans said that if they sang backwards it would be negative, and made some silly fake backwards singing noises.

Flans said they needed everyone to help them by counting for the next song, and asked for the house lights to be turned up. "We'll be able to hear you counting, but we need to make sure everyone is doing it." "And we need to make sure you're still here," John said, holding his hand above his eyes to look out at us.

Flans introduced "Doctor Worm" as being "about a doctor to the stars."

Then Flans started talking about how TMBG was at a place where they were ready to buy a pet, that you get to a point where you can buy the pet of your choice, but that they couldn't decide what to get. When he said "People in the balcony, you represent the kittens," I realized it was a variation on "Battle for the Planet of the Apes," which amused the hell out of me. I expected those of us on the floor to be "puppies" or something, but no, we were still apes. Flans determined that the apes won, "but I think an ape might be too hard to take care of. Kittens keep themselves clean, and I don't think apes do that. I've been living with apes for a long time and it's not as easy as it looks."

Flans introduced "Apartment Four" saying it was from Here Come the 123s and then said "Here COMES the 123s" for some reason. "Here Come Each Member of the 123 Family," John suggested.

After that Robin came out and ROBIN IS SO GREAT, AND SHE AND FLANS ARE SO FUCKING ADORABLE TOGETHER. She came out wearing a construction hat, and said she'd been inspecting the venue and was happy that she didn't find any safety violations. Then she picked up the mic stand and said "This comes right up, it needs to be taped down." So Flans went over and messed with it for a minute, and took the hat from her. "Thank you for handling that hat safely," she said. Then she said she was happy that the cords were all taped down with glow-in-the-dark tape. "Safety Comes First is my middle name. A lot of you don't know that, a lot of you think my middle name is Goldie." Then she said the "Safety Comes First" was set apart from the rest of the name with quotation marks "for safety."

When Robin was walking back offstage Flans said, "Robin 'Goldie' Goldwasser! Why we play the theme from Dallas, we'll never understand. We'll have to have a band meeting about that after the show."

Next they did "Four of Two." Flans said it was about a broken clock in New York.
JL: It's a true story.
JF: Is all of it true?
JL: Parts of all of it are true.
JF: It's like most things, all of it is true except for the parts that aren't.

After that was the Avatars. I was amused that they played them on and off with metal even for the kids. The Blue Avatar was like, "Children, did you know that my eyes are made of buttons?" and holding his eyes all up in the camera. The Green Avatar said "The better to see you with!" and made a silly noise, which made Flans laugh, which was cute.

Then they did Shoehorn. I knew that they did that at kids' shows cos they did it at the one I'd been to previously, but I do think it's an odd choice--should we really be telling kids to beat up people who disagree with them? Do kids even know what a shoehorn is, for that matter?

Flans ended up fucking up twice--during the second-to-last chorus he went straight from "He wants a shoehorn, the kind with teeth" to "Because he knows there's no such thing," skipping the other two lines, and then did it again the next time. But John just ignored him and sang it correctly. Then, after:

JL: I love those little guys, but they really need to rehearse.
JF: They were feeling pretty chuffed about their performance earlier today.
JL: I think that's the problem. They were too smug.
JF: Chuffed, smug, whatever vocabulary-building words you want to throw out at this family show. "What does chuffed mean?"
JL: It's when puppets are too sure of themselves.

John was dancing to the Black Sabbath walking back over to his keyboard WHAT. It was basically very similar to the dance he did at the end of Conan the other night, that arm-thrusting semi-twist sort of thing, only so much less appropriate.

Then they did WDTSS. For the "heat and light of the sun are caused by" part I knew Flans wouldn't be doing his old fallback of "Estrogen! Estrogen! And more estrogen!" so I was curious what he'd do, but I was expecting something very kid-friendly like "Balloons! Lollipops! And Legos!" or something. But he just did his other old fallback of naming neighborhoods of the city he's in, which I thought was weird (do little kids really know about the different parts of LA?)

Then Marty came up to sing something. He went over to Flans and said something in his ear, and Flans was like, "Marty has informed me that he needs help with this Grammy-winning song, which is a humble brag if ever I heard one." Then he said the song was about "the traditional American folk practice of 'high fiving,' which I guess they do at sporting events--as an indoorsman, I am unfamiliar with this practice." Kids were crowding around the stage and Marty high-fived a bunch of them while he sang, which was kind of cute I guess.

Flans introduced Birdhouse with "This is from our Flood record, from back when people still made records. Not to sound exactly like Sammy Davis, Jr." After they played it John said, "Yeh, we don't know what it means either."

Then they did the band introductions. Miller was playing some weird spacy-sounding thing on his guitar and Flans was like "Do that again!" and then laughed and said "How do you do that?" Then Flans did the "We're making up nicknames for everyone in the audience" thing--"Lady with the sweater, we're going to call you Dottie, because I had an Aunt Dot who wore sweaters. I loved her." I wonder if that was true--it was sweet if it was. Sadly, he didn't put John on the spot trying to make him come up with any, so there was no adorable awkwardness that way this time.