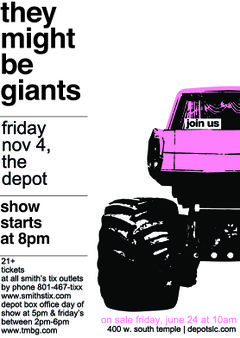 Another solid show at The Depot. The band seemed not too unhappy about being back in Utah. This was their third performance at The Depot. They've played there for the past three U.S. tours. Maybe that had something to do with it -- comfortable, familiar surroundings, no surprises. Although Flans commented that the tour is now at the point where all the days of the week merge into "one endless Thursday," The band seemed relaxed and ready to have fun.

The show launched with a recorded intro (says "SNEAKING" on the setlist), band member introductions by Flans, and then Flans's disco-funk anthem Celebration. This came as a surprise to me -- I put a $5 bet on Can't Keep Johnny Down for opening song. I mean, if there was ever a TMBG song purpose-built as a show opener, it's Can't Keep Johnny Down. Starting up the show with Celebration also gave the show a little bit of a different vibe than other shows I've seen. Instead of starting at 250 mph in a rocket boat, this was a gentle, funky push away the dock. Of course, Celebration was immediately followed by Can't Keep Johnny Down, which did rock things up a bit, and the rock version of The Sun kept it going that way.

Those three tunes brought the show to the first band chatter break, during which Flans pointed out that their first album was released exactly 25 years previously. He said that the album was now old enough to drink -- even in Utah. I thought they'd play some songs from the first album, but they instead went into Snail Shell and Fingertips. The show was now fully underway, and they proceeded to burn through a really chewy setlist of old and new tunes including The Sun is a Miasma, Birdhouse, Withered Hope, Damn Good Times, Ana Ng, and Cloisonne. The Battle for the Planet of the Apes was a tie, and the Avatars of Rock (with special guest Meg Ryan) sang Spoiler Alert.

Conspicuously missing this year was the megaton confetti delivery system. I had talked this up to a couple people who were with me at the show but were not at the show two years ago, when it looked like the entire Depot might filled up with little scraps of mylar. I was a tad disappointed at this. The stage was set up the same as it was two years ago, with Linnell's keyboard up front and slightly stage right, Beller's drum platform at stage right, Dan Miller at stage front-left, and Flans and Weinkauf wherever they wanted to be. One thing about having Linnell right up front is that it makes it easy to get a setlist -- I grabbed it off the keyboard after the band left. This show also featured a scrim hanging behind the band, onto which was projected a series of random video and stills, the most bizarre of which was a very long, almost motionless video clip that shows the torso of an unidentified person who happens to be holding an can of soda or beer.

I should say a few words about Jonathan Coulton. I listen to his music occasionally and I think some of it's just shy of ingenious, but I do sometimes tire of his formula -- sci-fi outlandishness, geek humor, and flatly ironic lyrics set to adult-contemporary-soft-rock tunes. I get it, it's kinda funny, but his stuff rarely makes it into my playlists. Still, I'd never seen him live, so this was one of the few times I was actually looking forward to a TMBG opening act. I usually sort of tolerate TMBG's openers -- I'm there for TMBG and I want TMBG to play as soon as possible. However, Coulton's live performance (even though he was solo) is really, really good. He was great with the crowd, very personable, and he rocked it. I was sorry to see him go -- there were several songs I would have liked him to play. He did play Skullcrusher Mountain, The Future Soon, Still Alive, and Re: Your Brains. He also played Mr. Fancy Pants with some sort of drum-sample gizmo that really wowed everyone. I don't know if he's every played live in Utah before (I think he said this was his first time), but maybe he'll be back -- seemed like just about everyone in the house knew his songs.