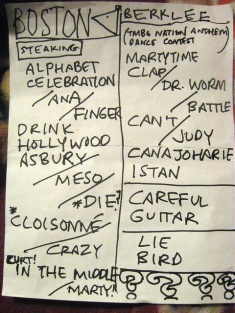 They Might Be Giants
Berklee Performance Center in Boston, MA
October 1, 2011 at 7:00 PM

My membership in the TMBG Instant Fan Club includes two tickets to one show. When I requested the tickets for this show, I was told that they would probably be "in the middle of the orchestra". They were, in fact, all the way on the back left of the top balcony. We would have had an excellent view of John Flansburgh's thinning hair and that's about it. When we sat down, we realized that in fact, ALL the fan club seats were up there, and there were many disgruntled fan club members sitting around complaining.

Well, what's the point of complaining where no one can hear you? I sent an unhappy email to the fan club staff and then trekked back down the two flights of stairs and spoke to Anna at the merch table. She called Scott the tour director and also told me that the Berklee had caused them a number of headaches (among other things, they had apparently changed online ticket vendors mid-season, which would explain the frantic tweet from @TMBG saying "Tickets aren't actually sold out! You just have to buy them at this other website!" yesterday). Scott said he couldn't really do anything and I should ask the box office to fix it. A nice and rather harried women at the box office said the show had "sold really well" and therefore the nosebleed seats were the only ones left for the fan club. (Uh, no, that's not how it works. The fan club seats should be reserved before general ticketing even opens.) She couldn't re-seat everyone, but she could give me and my partner seats in the back right of the orchestra section where there were just a few left. I said I would take it, and texted my partner, and we got to our new seats just as the band came onstage--half an hour late, because at 7:25 the venue was just letting the last of the very long line through the door--and struck up "Alphabet of Nations".

It was not the best TMBG show ever. (The best TMBG show ever was 9/27/08 at Le Poisson Rouge, followed very closely by 8/1/07 at the Bowery Ballroom. In my opinion.) They really ought to stop playing venues with seats. During "Clap Your Hands" you should be able to feel the place shake when everyone's stomping in unison; the Berklee does not shake. There was basically no room to dance. The band did encourage people to come down to the front and dance in the aisles... at which point some very pissed-off security staff started coming up and down the aisles and making people move back to the sides so as not to create a fire hazard. The sound wasn't always brilliant and the lights were a bit off-cue, and of course there were all sorts of A-through-M songs that I wanted them to play and they didn't, most particularly "Don't Let's Start". The band was in good form, despite Flansburgh having to use a spare guitar after dropping his primary guitar just before the start of the show, and I was pleased to hear "Cloisonné" and "Careful What You Pack" (very personally resonant right now, just after Rosh Hashana) and "Doctor Worm" and "Damn Good Times", and Curt Ramm did a nice intro to "Istanbul", and the crowd did manage to rock pretty hard to "Ana Ng" and "Birdhouse in Your Soul". Nonetheless, since I've had mixed feelings about both the TMBG shows I've attended in seated venues, the next time I hear they're playing near me I will confirm that it's standing-room-only before I get my tickets.

While writing this entry, I received a really nice email from Scott the tour manager apologizing profusely for the bad seats. I replied saying I'm sorry he was stuck cleaning up after the Berklee's mistakes and I hope the rest of the tour goes more smoothly. I do feel bad for the fan club members who couldn't get new seats, though, and I hope the band sends them some sort of freebie or offers them tickets to another show.

Last show I went to was the free Apple store show, which was spectacular. This show was disappointing, and I don't think there's anything TMBG could've done about it. It's the venue's fault.
Rose Fox is right-- a seated venue seems terrible for TMBG. (I was a bit grateful during the second show, but moving on..) It's worse than just because it was a seated venue. Berklee's a musical college with musical college security and staff-- the security staff seemed a bit more untrusting, or not even used to the attendees.
The A through M show was packed beyond belief. The show wasn't much fun with the people Berklee required you to sit with. I had some loud people behind me, some frizzy hair people in front of us. :( I wish I had realized that the "fill the aisles and come up front Dance Contest" from Flansy was a "This is no longer a seated venue" during this show (this is only my third TMBG show!)
I got my tickets in July, and got a second set through the IFC for the second show. My second show's seats were literally two rows AWAY from the previous show's--about the same place as the first's show. Far in the back underneath the orchestra-- I could turn around and see the back seats. This means that the IFC got screwed when it came to special treatment. I wish I had gotten a closer/up-front seat originally...
A lot of great songs and funny performances. Very sad that Flansy had so much trouble with his favorite guitar, but they handled it well as usual.
It was great to have three encores, too. I'm not sure if they knew we loved them in spite of the venue and crowding, or if they wanted to make up for something-- but it was a great feeling to see them come out for us again and again. :D
Onto describing the second show.. (Same as the first?)
But yeah. NEVER going to a seated venue, if I can help it. :X