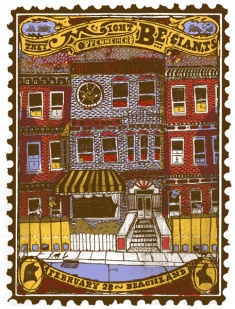 They Might Be Giants
— with Oppenheimer opening —
Beachland Ballroom in Cleveland, OH
February 27, 2008 at 8:00 PM

I gotta say... this was my second TMBG show... and it was amaaaazing! I showed up to the Beachland like an hour and a half before the doors opened... so I waited in the cold for a while. Luckily, though, I was one of the first people there. So, the doors finally opened after some of the people inside taunted us, and we entered the Ballroom... where we saw the infamous heads of William Allen White lining the back of the stage. I knew it was gonna be a great night.
After an hour of waiting, Oppenheimer casually trotted out and began their brief set. I gotta say, I really enjoyed them. They were nice, and my friend gave them his hat in between songs at one point. And, while I enjoyed their robotic vocals and air-horn antics... I was really waiting for Them to take the stage. About a half-hour after Oppenheimer were done, They Might Be Giants took the stage.
I was front and nearly center, right in front of John Linnell and his magic keyboard, and the evening started with the lovely "Hey, Mr. DJ..." which was very welcome. Afterwards was "Memo to Human Resources", which, as they explained, was on their setlist last time they played the Beachland, but they couldn't play it because the show got "fucked up." Flansburgh explaining to the crowd that the band would never only play one song and leave was priceless. "I saw the looks in your eyes, I knew what you were thinking, and we would NEVER do that!"
Later on, Flansburgh had the two spotlight people shine the lights on themselves to check for beards, and a disappointed Flansburgh searched the crowd for beards, only to find an obnoxious guy who was drunk, so he didn't count. They played a new song from "Here Come the 123s", the catchy "One Dozen Monkeys", which was led by Flansburgh, meaning the lyrics became "I am a dude, 47 years old. That's one more than 46 and one less than 48!"
They plowed through some fan favorites, including "Doctor Worm", "The Famous Polka" (I got to touch Flansburgh's guitar!!!!), "Puppet Head", and "Istanbul", and finished a strong set with "Experimental Film".
The encores were a lot of fun. "Particle Man" featuring the Elusive Butterfly of Love was cool, but nowhere near the fun of Particle Mo. "The Cap'm" was great to see finally. The song that totally surprised me, though, was "How Can I Sing Like A Girl?" I really didn't see it coming. The entire show ended with a great rendition of "Why Does the Sun Shine?" It seemed Flansburgh struggled to come up with something for the "heat and light" part, but I think I remember it being something to the degree of "The heat and light from the sun are caused by the nuclear reaction between Nathans, Decepticons, Ramikans,... and Norbits."
Overall, this was like the best anything ever... but I'm still so new to the TMBG show scene... I have many more shows to see.

Hey, you were with the hat guy? I wondered where that hat came from...Anyway. Great show all around, with a number of unexpected songs making appearances on the setlist. This was my second TMBG show as well, but taxi troubles led to me getting to the venue just 10 minutes before Oppenheimer took the stage. (I've warmed up to Oppenheimer more since when I first saw them at TMBG's last Cleveland appearance in November). I loved seeing "I Palindrome I", "Ana Ng", "Put Your Hand Inside The Puppet Head" and others live, but I will say that the surprise appearance of "How Can I Sing Like A Girl" excited me more than anything else. I really hope this show gets released on the download site based on the awesome setlist alone...not to mention the banter. (In addition to the beards, there was also a great bit about CDs versus records in there somewhere.) I tried to get some videos of it (they're on Youtube)...the sound quality is good, but there are generally tall people standing in front blocking the view or making the camera go out of focus. Plus the memory card died right after they started How Can I Sing Like A Girl...) The band looked and sounded great on the first night of their tour, despite the awful Ohio weather.

A very good setlist, this is the 5th time I've seen them and they play a ton more classics than I've ever seen them play (Hey, Mr. DJ, How Can I Sing Like A Girl, I Palindrome I, Put Your Hand Inside the Puppet Head, It's Not My Birthday!!!!). Other things of note, there is a new Drummer "Mr. Frank Volarti, the international drummer" (apologies if I got the name wrong) as Flans put it. Also the intro to Istanbul, not Constantinople now has a 2 minute long acoustic guitar jam by Dan Miller. Flans brought out a second guitar that isn't his standard blue one, it looks like the same model (epiphone?) but sunburst colored and the pick guard is adorned with stickers of the puppet giants. Also Flans playfully changed the age of the narrator in One Dozen Monkeys. And I saw Linnell crack a smile when Flans was attempting to shut up a drunk bearded guy in the audience who was trying to get his attention when Flans declared that he saw no beards for the nightly spotlight beard count. Nothing else to report, but a great show that I was able to sing along completely for, and managed not to be ruined by the exceedingly drunk people in the audience.

My wife and I made the trip to Cleveland from Chicago to see her grandparents and They Might Be Giants. This was my 8th Giants show, and we managed to get there early enough to get 2nd row immediately behind the hat guy and his friend - which makes it by far the closest position I've ever had. We were fortunate not to be too impeded by your standard concert weirdos - drunk bearded guy, really-loud-lyrics-singing guy, crazy jumping guys. Also there was a group of 3 or 4 women next to us who were obsessed with getting to the front row, I think they were trying to hit on Linnell or something. That surprised me, I always though TMBG's fans were 14 year old boys, or guys who used to be 14 year old boys. :) So, I will add to my concert weirdo list: groupies who want to "do" TMBG. In any case, the set list was fantastic and Mr. DJ was an absolute gem - it was my "must hear" song and they played it first! Dan's solo precluding Istanbul was phenomenal, as was Puppet Head, Doctor Worm, and Ana Ng. Unlike J Gatz, I thought "How Can I Sing Like A Girl" was a little flat - and a weird choice for an encore song. We also nabbed a beautiful handmade concert poster by the Bubble Process - for others who attended and want a neato souvenir, check http://thebubbleprocess.com.

Hello everyone! I just had to make an account when my buddy "Ehsteve" up there told me I was gaining fame as "the Hat Guy." So yeah, that was me! I'm pretty sure I remember you, JonasD. At one point before TMBG came on, Ehsteve and I kind of sat down on the floor with our elbows on stage, and your wife made some joke that was like "If you stayed down there I'd get a better view of the stage" or something, right? So this was also my second show, and it blew away the first. The set was spectacular, and I was especially happy so see Ana Ng in there. I'm still holding out for "She's and Angel" one of these days. I was kind of bothered by the crazy girls trying to get up front. The one who actually broke through was standing next to me, and wow, she really did scare me. I didn't mind too much though. I managed to get out of this show with an Oppenheimer set list, autographed, and their pick, as well as a TMBG drum stick! And of course, not to mention, the Oppenheimer guy's sweat in my hat.