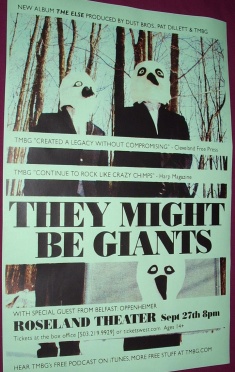 They Might Be Giants
— with Oppenheimer opening —
Roseland Theater in Portland, OR
September 27, 2007 at 8:00 PM

The Roseland was smaller than I remembered. It was actually 20 years since TMBG had played there; they mentioned that in the meantime they had always played at the "other place" (Crystal Ballroom), and were glad to be back there.
When Oppenheimer came on, the place was only about a half full. When they started, the crowd was pretty quiet and still, despite the fact that they totally rocked the place. Everyone loved them though, for at one point, Shaun commented on how quiet we were and a huge cheer went up - quite out of proportion for the number of people there - and he said "Wow they're really really loud!" It was clear that they were very appreciated when they finished. I told Shaun that they were great (I was in the second row at that point), but I don't think he heard me.
About 30-40 minutes later, TMBG came on and immediately launched into The Cap'm. The place was about 3/4 full by then, and the crowd was way into it.
One thing that I noticed right away, as did a number of my friends, was that Linnell looked extremely stoned. Whether it was just travel weariness or 20 cups of coffee, no one knew, but he certainly looked and sounded really weird for the first two songs. It was great to hear him sing Take Out the Trash, though.
They completely fooled me when they announced after the Phone Call from Carl Sagan that the next song involved a confetti cannon - I thought it was going to be Polk - but no, it was Doctor Worm. Another odd part was that they said they had two confetti cannon songs , but no other song used it (note: they actually just said that they had 2 confetti cannons, which they did, one on each side of the stage).
Later on, near the end, they said that their last song was going to be The Mesopotamians, but it wasn't; they went into Twisting afterwords (note: they actually said that the mesopotamians would be the last song off their new album, but not the last song).
For the encore they horns came out, and totally energized the crowd even more than they already were. During Particle Man Linnell did the verse about Carl Sagan challenging Triangle Man, but immediately after they began, Triangle Man smote Carl so he had to return to the grave once again.
The crowd really, really enjoyed Flans's comment about how Ant wasn't originally a political song, but it had turned into one. I expected this, since Multnomah County is one of the bluest counties in the whole country.
For the second encore, just the Johns came out and did Maybe I Know, which was the first point at which I noticed a significant drop in the number of people singing along; up until then you could hear people pretty well.
They finally finished up with Instanbul, which people had been clamoring for the whole show.
All in all, it was fabulous.

The crowd was very energized throughout the whole show. I can't think of a single time where you couldn't hear the crowd singing along.

My wife and I were in the perfect balcony seats with a great view of the stage and the floor. What a great show. For me it was the perfect mix of familiar favorites and not so familiar songs that were great nonetheless. The horns were great, the encores were great, and the phone call from the dead was very funny. I didn't know that iPhones required a warm living finger to activate their touch-screen :). The only downer was the technical difficulties that prevented a download of the show. I imagine they only want it out there if it sounds good, and if it doesn't for whatever reason, then you gotta respect that.
I'll go see them anytime they come within a 3 hour drive.