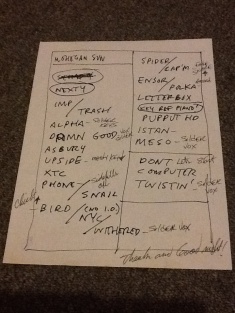 My second TMBG show in 4 days. It was a really fun show, and the turn out was crazy (the fans were REALLY scaring the gamblers). Free yellow foam hands for EVERYBODY. TMBG only played for about an hour, and the acoustics were AWFUL, and the Mohegan Sun staff would not let them turn up the volume to usual concert level, despite protests from the band and audience. There was surprisingly a very high new stuff to greatest hits ratio, which I especially noticed since I attended with a friend who only saw TMBG once, and another who has never seen them, and neither of them have heard The Else before tonight, but one of them said "I definitely need to get this new album from you" on our way out of there. TMBG played Charlottesville, I Palindrome I, and Why Does The Sun Shine? during the soundcheck, so that was 3 additional songs (including one I've never seen before live) for the night.

The running gag of the night was the band making wolf howls at every moment of silence. The audience would in turn make wolf howls instead of applause and cheering. --Richegreen 06:08, 29 July 2007 (UTC)

I don't have too much to add. Just the following: 1) Famous Polka was performed without the lyrics (which seems to be standard as late); 2) On Puppet Head, They did not do the "Memo to myself/Do the dumb things I gotta do today/Touch the puppet head" lyrics, opting to just let it go as an instrumental through that section instead; and 3) As is frequently the case, Dan Miller did an extended solo immediately before Istanbul. I didn't have a problem with the sound, but I was pretty close to the stage and didn't need to wear ear protection, so I suspect it wasn't so great for people further back. --Harrycalder 07:17, 30 July 2007 (UTC)