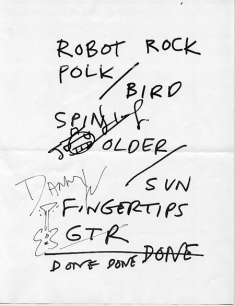 They Might Be Giants
— with Trachtenburg Family Slideshow Players opening —
Athenaeum Theatre in Chicago, IL
October 26, 2002 at 8:00 PM

JF: That's it, I quit. (His mic wasn't working at the beginning of Ballad.)

After his reading, he explained that the McSweeney's offices have recently moved from Brooklyn to San Francisco, but it's in an area that's zoned for retail so they had to figure out something to sell. At the Brooklyn offices they sold "something for people to put on their show animals, if they have like a show pig or a show ferret, to make their coats shiny, it's called 'ferret sheen', and supplies for the amateur taxidermist", but the office in SF is right next to the only other place that sells things for the amateur taxidermist, so instead they sell "pirate supplies", which pays all the rent by itself.

He said they also run a program to help young poets and that the next reader, Ayoka Stewart, was a product of it. Then he said she's a freshman at Smith college this year... when he said "Smith" someone in the audience went "Woo!" and he said "That's the only time that will ever happen", which apparently offended Ayoka. "Smith is the spot", she declared. She read a few poems that were really good.

In the middle of Ira Glass' thing, John came out and did the Garrison Keillor thing that was mentioned in the review of the St. Paul show, only it was a little longer and he prefaced it by saying that they find him "really irritating."

They played a little of Free Ride at the end of the McSweeney's portion, after Hodgman thanked everyone, with Flans singing.

During Friday's show a few people left before the regular TMBG set, but at this show it was like half the audience. This made me sad, and apparently made them sad too cos they played a set even shorter than the already short set. However, it met I got to move from my seat in the very back to front row directly in front of John, which was nice.

The Spin the Dial highlight for me was some jazz thing that John seemed to be having a lot of fun with. There were a couple of other things that They and the audience seemed to recognize, but I didn't. Oh, also, before they started Flans asked "you doubters in the front row" which side of the dial they should start on, that was kinda fun too.

Linnell sighed very dramatically during the Older pause. It was cute.

After Sun the music that they usually play when the show's over started and I was momentarily panicked, but John hadn't taken his sax with him and the lights were still down, and sure enough a minute later they came back. Flans said something about "I don't think we've ever had the encore stolen back from us before."

I got to talk to a lot of people after the show. First Ira Glass, who seemed amused when I told him he was good in Gigantic. He said what a good show it was and I said I was disappointed that it was so short, and he said "Flans noticed all the people leaving. He was trying to be considerate. They wanted to rock longer, believe me." Then he said something about them being in the lobby signing stuff now and I said "I'm assuming that just means Flans." "Well, that's cos after the show Linnell goes on the bus and drinks milk and eats pizza." "He does? Really? Are there any other things you can tell me about him?" "He consumes a lot more peanut butter than the average person, and Flansburgh's wife Robin just cut his hair. Isn't it cute? And...you know about his baby, right? Um, I don't think I have anything else, I don't really know them that well."

I got Flans to sign my setlist (which I got from Iggy, who apparently recognizes me now-"I remember you, I've seen you at lots of shows. You're from Houston, right?") and complimented him on his orange Pumas, which some of you might remember from the Central Park show, and he said "They were a gift from Dan Miller. They were too small for him. He has very large feet."

Then I spent about 10 minutes talking to Tina and Jason Trachtenburg. I had talked to them, mostly Jason, and mostly about John, for a while before the Friday show but I didn't know who they were at the time. Then at this show they saw me and Jason said "Hey, you made it back." So I started talking to them again and apologized for not knowing who they were before the Friday show, and Jason said "I was so interested because secretly, I'm obsessed with Linnell too, so I understand." I told them people here had talked about how cool they were and they seemed really excited, and Tina said I can stay with them the next time I'm in NY, which was pretty fucking cool. You all definitely need to catch them on Conan.