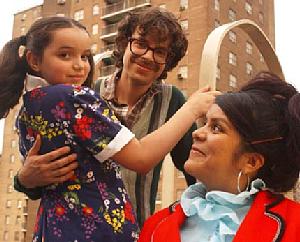 The Trachtenburg Family Slideshow Players are an unusual trio whose name is surprisingly forthright: They are a musical outfit composed of a husband (Jason Trachtenburg), wife (Tina Piña Trachtenburg), and daughter (Rachel Piña Trachtenburg) who write and play songs to accompany slide reels, which are found at thrift stores and yard and estate sales. The idea came together after Jason Trachtenburg, a pop/indie/anti-folk musician who had been working the open-mic circuit, found he was not attracting a large audience to his music. Tina suggested supplementing the act with a visual medium to the musical performance and stumbled upon an old slide projector, and soon enough Jason was writing songs to go along with the slides.

In the band, Tina operates the slide reel, Jason sings lead and plays keyboards and sometimes other instruments, and Rachel plays the drums. They played a series of shows opening for They Might Be Giants for their 2002 tour — a TMBG newsletter states, "If you haven't seen the Trachtenburgs you don't know how good live music can be!" Jason Trachtenburg's solo cover of "Doctor Worm" can be found on the Hello Radio: The Songs Of They Might Be Giants tribute album.