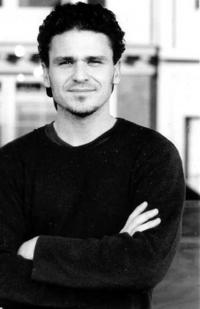 Dave Eggers is the author of A Heartbreaking Work of Staggering Genius and You Shall Know Our Velocity!, and the editor of McSweeney's Quarterly Concern, a nice literary magazine. Issue #6 of McSweeney's featured a soundtrack primarily by They Might Be Giants. Since then, TMBG and the McSweeney's gang have embarked on several literary-readings-cum-rock-concerts together. Eggers also appeared in Gigantic, in which he had some very nice things to say about the song "Birdhouse In Your Soul."