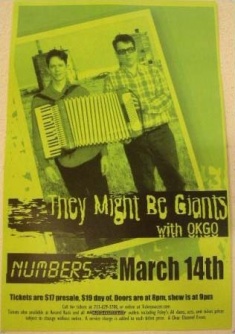 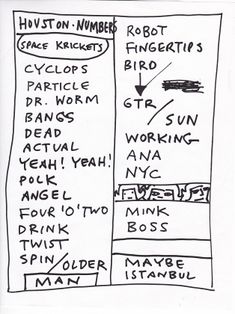 Review by --Self Called Nowhere 03:58, 23 June 2008 (UTC):
Well, the highlight of the whole experience for me was before the concert even started... It was reallyreallyreally exciting for me but probably not that interesting to anyone else so... (Details of which can be found on Quinn's website. —ed.)

About that time I saw Flans stumble off the bus and said hi to him too, he looked really tired, I think maybe he just woke up or something. And then I heard them start soundcheck, which I thought was odd, cos I had never seen Danny show up. Of course, later I found out that was cos Danny wasn't there. (Jeremy Chatzky was filling in cos Danny's wife had just had a baby.)

Also not there: OKGO. They were supposed to be opening but Muckaferguson did instead, I don't know what happened. I like OKGO but I saw them at 3 shows last year and I'd never seen Muckaferguson, and some of the comments about them in the newsgroup had made me curious. I got a copy of their setlist (it was on the back of a Mexican food menu) so I might as well put it in here.

They were pretty rockin', and funny. "Man, we're doing all these songs with all this swearing, and then I look and see all these kids in front, and I'm like 'Cool.' Cos someone needs to teach them, and it's never the f**king parents." "Yeh, parents are useless." ... "This is our last song, and then we're going to go backstage to those nice hot towels. You have to love hot towels, they're like clean sheets...c'mon, give it up for clean sheets, motherf**kers!"

After an hour (during which one of the aforementioned kids in front asked me every 3 mins or so when they would be out) TMBG finally came out.

This was the first non-Northeast show I'd been to and it made me realize how spoiled I was, how adjusted I'd gotten to being at shows where at least some of the audience is actually familiar with them. This was very much a Floodie crowd, *huge* collective cheer when they started Particle Man, and I assume they expected that and that's why they put it so early. And after Birdhouse this guy next to me actually yelled "I LOVED YOU ON TINY TOONS!" which really pissed me off so I told him how, y'know, it was twelve years ago and they've done a LOT of stuff since then, which I maybe didn't neeed to do, but I was pissed. "WELL, I STILL LOVED YOU ON FUCKING TINY TOONS!" God, I hope they didn't hear him, it would give them a bad impression of my hometown. (And did he think Birdhouse was on there, or did he just randomly pick that moment to say it?)

Let's see, what else...no Elusive Butterfly or anything else during PM, the "I don't want the world" part of Ana was done by the audience only, John was jumping around more than I've ever seen him during Guitar...During the Actual Size drum solos something went wrong with Dan's drums and it took him a few mins to fix it. Flans was still back there. "The mystery...of silence. *pause* Your drum solo satisfaction comes first with They Might Be Giants. *pause* So we will *stop the show* if something goes wrong." And John was just standing in the wings drinking coffee and looking amused. Spin the Dial got fucked up too, the radio wasn't plugged in right or something (John: "Keepin' it real!") and Jon Carter had to come fix it, right after Flans did the whole "Guys are leaning over to their girlfriends saying 'This is so fake' right now" thing (he also said "It's not drowning out the voices in my head!" at some point)...he did a little bit with this country song but then said it was still fucked up and they would do it again later, but they didn't. Flans mentioned the Grammy before they did BOM, he sounded like he's still slightly in shock. At the beginning of the second encore someone gave him a bag of gumballs. "I'm going to put this in a safe place." And Miller's acoustic Istanbul intro was even cooler than usual.

Random fun bits of dialogue, as well as I can remember them...

JL: Hey, throw that up there, I need to check something out. (There was a balloon bobbing around the audience, somebody threw it over to Flans. He inspects it and then pops it.)

JF: I feel like a five year old kid at a birthday party. And...(lowers his voice) the party's over.

JL: This is the part of the show where everybody cries.

JL: We're doing this new thing now where we start the songs without counting off, using ESP. A lot of the bands are doing it...

JL: I call it ESP three-thirty-five. *pause* For some reason.

JF: We have this other album coming out this year, an album for kids.

JL: And we don't mean the kids...It's an album for children, so it has no swear words or death references. Which is disappointing for some of you.

JF: But it's still a crazy psychadelic experiment.

JF: I feel like Charlie Daniels when we play that song.

JL: You're Charlie Daniels and I'm the Devil. (in a voice kinda like the one he uses when he introduces Polk sometimes) "Now Devil, you play that accordion!"

JF: Now this next song is a very adult song, it has no swear words but it's about alcoholism. (cheering) Yeh, this is dedicated to everyone in the audience who just went "Yeah!"

JF: This is a song we don't do very often, it's on an EP put out by Emusic, and it's for sale at the t-shirt stand, as sort of a memorial to dot com's past. This song isn't about us, although we have formed a shadow band in case They Might Be Giants should be unable to tour.

Afterwards I talked to Flans, got him to sign my copy of JH, and asked him to thank John for me since I hadn't been able to. And I told him how I got kicked out of school partially because of them and he said "I'm not going to take responsibility for your crazy behavior." And I asked him to thank John for me cos I hadn't gotten a chance to. And Muckaferguson gave me their CD for $10 instead of $12 cos that was all I had, which was pretty cool.