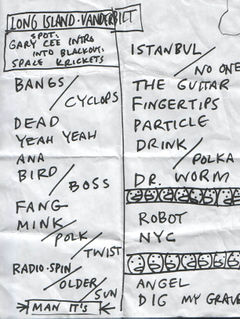 Encore 2 - (on the setlist but not played)

They Might Be Giants
— with Common Rotation opening —
Vanderbilt in Plainview, NY
December 29, 2001 at 8:00 PM

Review by John J. Ryan
Saturday - 12/29/01 - After working out plans with my other friends, who I was taking to the show, we decided to show up shortly after 7 PM. This did mean missing out on usually front row spots, but it was PAINFULLY cold, and we felt it better to not get sick for the party to come on New Year's. We all show up as they are letting people in, and go inside.

The line has moved inside for a long time already as since the people waiting for hours were shivering, they kept people warm by wrapping them around the bar inside. We had to get our coats checked inside and they were searching EVERYONE for stuff like cameras. "What's that little box have?"Â "Oh, just stuff." "Yeah, okay." "Let me see that." "Some people."

Finally we get up to the stage still manage to get third row stage Linnell where most of the "regulars"Â were. And then we waited until about 9:30 for the opening band to come out. As we waited, the locals got restless and starting chanting curses. I started to get the feeling that this was going to be one of "those" crowds. And I'm talking the crowd at Toad's Place I was a part of, which was the worst crowd in my TMBG show-going history.

The opener comes out, Common Rotation. They were very good, if just a bit odd. It was a 5-piece band with drums, electric guitar, acoustic guitar/lead singer, bass, and other lead singer. The other lead singer happens to be Adam Busch, who plays Warren, one of the "Geek Trio" on Buffy the Vampire Slayer.

Common Rotation is a band that used to be in Long Island and now lives in LA. The singer from Buffy did some banter about talking to Flansburgh and calling him "FlansÂ." Later, he came back said that Flansburgh just talked to him, "Don't call me Flans."Â They did mostly folk-rock with hip-hop or ska beats mixed in. They were very high energy, and I did enjoy them as an opener. They did a few covers in the middle saying, "We want to be your opening band..." and did a snippet of a Weezer song and a cover of the Gap commercial song "Give A Little Bite." Then they wrapped it up by doing a full version of "Don't Let's Start" in almost a country version. I enjoyed that since they pulled it off well and didn't butcher it. I wonder if they know about We Might Be Giants, Too.

Of course, the locals did not like them and kept yelling "YOU SUCK!" or flipping them off. Just being plain rude and also pissing off the local Common Rotation fans in the house. Totally uncalled for, unless the band is rude to the audience, which they weren't. It set the tone for the rest of the night.

Fortunately, TMBG came out relatively soon after that, only about 30 minutes rather than an hour. TMBG played a very standard set that has already been reported on the newsgroup. Here are the highlights:

Yeh Yeh - Linnell sports the new sax he got to replace the bari sax that was stolen in England during their tour there. This sax is a tenor sax, something I'd never seen him play. He can plays all the parts, but I prefer the bari more for the TMBG sound.

Spin The Dial - Definitely one of the better ones. They spun onto "Where Does My Heart Beat Now?"Â by Celine Dion, and Flansburgh started singing it in this high voice making up a lot of words. Then they came to Elton John's "Tiny Dancer." The crowd started singing this almost religiously, and Linnell knew it cold playing it on keyboard. Flansburgh sang a few bars. The best though was when they got to "Love Shack." They spun it right at the end of the song where you hear, "You're WHAT?" And the audience responded: "TIN ROOF!!!!" "RUSTED!!!" After which, Dan hickey chimed in with the drum upbeat, and the rest of the Dans and Linnell came in right on cue like they knew the song. Of course, Dan Hickey knew the song cold as Flansburgh explained, "Ladies and Gentleman, former drummer of the B-52s, Mr. Dan Hickey!!!!" And that's a fact!

Istanbul - Linnell trades some solo riffs with Dan Miller on his tenor before Solder goes into his standard solo. Forget the actual song, Dan Miller's solo is the reason I look forward to hearing Istanbul!

No One Knows My Plan - Flansburgh: "Everybody Conga! I'm not f**king kidding!" But very few people do.

And now, the lowlights: And if you were at the show, you know what I am talking about; you know it was the crowd. From the get go, I wasn't into the show that much as the negative vibe from the people just festered. Then at the beginning of the show, there was a push to the front by some guys, which didn't go over well at all. They just stood there and watched until a Flood song came along. They shortly, but that wasn't all. During Birdhouse, one guy was apparently VERY drunk. He started dancing like a maniac moving around bumping into people. This started a small mosh pit with some of the locals who saw this as an invitation to do so. A lot of people were yelling at him to stop, and he didn't stop until one girl slapped him silly.

Just lots of rampant disrespect of people throughout the place, and the band knew it. As soon as the incident during Birdhouse occurred, TMBG immediately ripped through the set list, going through the motions. They only came out for one encore, skipping one of my favorite live TMBG songs, Dig My Grave (Which with that crowd, you KNOW what would happen if they played that.)

Well, after so many shows, you can't win them all and expect the best crowds. Sometimes it doesn't go as planned. It's just too bad for the people who were at their first TMBG show. Hopefully, they still thought the show was great and will want to come back.

Oh, after the show my friends and I went to a diner for a post-show dinner. It made for great concert stories and what not. I didn't get home until 4:30 that night, but no big deal. I had nowhere to be that soon the next day.