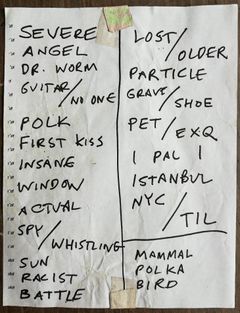 They Might Be Giants
— with Mono Puff opening —
Bowery Ballroom in New York, NY
October 17, 1998

Review by Jordan:
This was the last show in the Bowery trilogy. This was even more special because Mono Puff opened for TMBG! After being deadly sick at the beginning of the shows, it was really great of Flans to pull double scale on the last one! Mono Puff was great, but onto TMBG---I didn't have as good a time at this show, because whenever I attempted to move or sing, the guy next to me would turn and give me a dirty look...I also wasn't with anyone I knew this time, so I felt kind of awkward. However, it was still a great show, with plenty of great quotes!

Before The Guitar, Flans told us how---"We've been on the road for 6 weeks in a giant bus, and everybody goes 'its so cool its so cool', and there are 12 guys living on this bus...its sort of like a really nice studio apartment with a roomate...people go 'Oh this is a really nice place' your going like "Check out the guy I gotta live with" (pointing to Linnell...audience laughs at Linnell)...That thumb was pointed at EVERYONE, all the way back to me...but you know...11 guys, 12 guys, it's unbelievably BEAUTIFUL...6 weeks, bunks, its like being in the army, only........only....you're the one getting killed." Instead of doing the usual "Everybody Conga" song, Flans gave trumpet player Jim O'Connor a good tease--"Introducing Mr....Jim O'Connor...the trumpet player...with the very nice clothes...Mr. Jim O'Connor....will dazzle you with both...his sense...of personal style..." Before James K. Polk, I experienced again, some great hilarious chatter between the Johns. Here it is for your viewing pleasure---"Some people don't know what to expect...and then there are those other people in the crowd...Incidently, it looks like the whole front row of this audience is the same as last night...it's freaking me out, it's like I got caught in a worm hole on the way home last night, and I'm living the whole day over again, thats the way I feel"- Linnell "WHAT MAKES YOU THINK YOU'RE NOT, JOHN?" -Flans, while Linnell plays creepy Twilight Zone music on the keyboard. "So...I guess I don't need to do the same rap again, because everyone's already heard it...this thing here is a cannon, it goes off...KABOOM...Look out...especially you (pointing to little girl in front of cannon), be very very careful. Somebody said tonight...you know we joke a lot and then something turns out to be real, I never know, somebody said they were thinking of putting coleslaw in the confetti cannon. I dont know...these guys kid around all the time, but then, you never know! " - Linnell "Last night of the tour John,the hijinks might start"-Flans ""Thats right, maybe we're getting hazed by the crew, maybe they're going to start injuring the audience as a special prank on the band, WE DON'T KNOW"-Linnell "Something to look forward to...an early retirement" -Flans "Thats right, those lawsuits, the ones coming at us and the ones were enacting against the crew members." - Linnell Before She's Actual Size, Flans noticed..."I was discreetly trying to take a drink and I looked back at the backdrop and saw a huge silhouette of myself taking a drink..." During She's Actual Size, Flans instructed drummer Dan Hickey to give us some typical drum beats through the ages. I am not sure of some of the names mentioned--"Ladies and genlemen, Mr.Dan Hickey is gonna give you a brief tour of the 70's... the early 70's sounds of (Mr.Jon Bottom), moving on to (Gary Bletter...), Who could forget the fun we had with the disco beat...that put so many people out of work, ALRIGHT! And what about the new wave years? which brings us to the 80s"

Before Battle for the Planet of the Apes, Flans asked the audience how the Yankees were doing. When nobody knew, Linnell pointed out--"Bunch of non-jocks we have here" Flans asked if anyone had a radio with them, which led to his instructions for "Battle." It was going to Mets vs. Yankees instead of People vs. Apes, however no one could decide who would me who, so it was left to the normal People/Apes scenario. Flans stated -"I think these guys (Dans) represent People excellently" Linnell said Apes win, then Flans said People win at the same time, then Flans said "We don't want to talk about it" Before Particle Man, Linnell did some euphonium prasing--"Yeah we got a euphonium, yeah, oh yeah, we got the euphonium!" Then, Flans did his typical pre-Shoehorn with Teeth song about Rick and Dan---"Born in a graveyard...raised in a garage...hes a thirsty cyborg with a taste for human skin...his name is Rick Rivera and hes come from stage right to plug in the glockenspiel...Born in New York, raised by his parents, hes a thirsty drummer with a taste for funky fresh beats, and hes come from NYC to hear you scream out his name...his name is DAN, DAN, DAN, DAN, DAN, DAN, DAN, DAN" and after--"Back to your drums...you must go back to your drums"

Before Pet Name, Flans wanted to get all the lights in the room out---"We didn't even figure this out...we tried to turn off all the lights and chain the exit doors for this next song, this song is the slow-dance-with-the-person-next-to-you-who-you-dont-know-song, so Iggy [the lighting guy] can we turn off all the lights in the house? Oh I still see some fire exits, we're still up to code...Ok...getting closer....theres still 2 fire exits, ok...we're almost completely unsafe." Before I Palindrome I, Linnell wanted to be creepy---"Here's a song that we haven't played a lot...so Im gonna speak in a creepy old guy voice (In creepy old guy voice--)..yeah...this song goes back ways...oh yeah, here it comes ohhh"-And a very special moment for me, at the end of Till My Head Falls Off, Linnell picked up his keyboard and let me and the people next to me play it!!! He acted like we were playing tug-of-war and tried to grab it back from us, with a very grimmacing funny look on his face. All in all, it was a GREAT show...they played a lot of songs I had never heard live before, including Window, Absolutely Bills Mood, I Palindrome I, First Kiss, and Your Racist Friend. And so the trilogy ends.