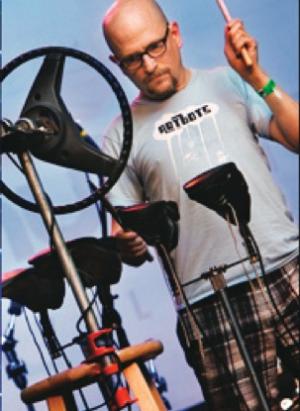 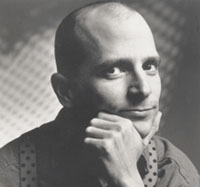 Joshua Fried is a musician, composer and long-time collaborator with They Might Be Giants.

In 1986, he appeared on a split single with TMBG. During this time, he also occasionally worked as a soundman at CBGB, where TMBG sometimes performed.[1] In the '90s, while in the Hello CD of the Month Club, he co-performed (and wrote the lyrics for) "Lullaby To Nightmares" which TMBG would later re-record, and "Hello Hello," a Gary Glitter cover, which Mono Puff would later re-release. He also joined John Flansburgh and others both under the Hello imprint that was the short lived Hello The Band, and earlier with the performance art group Watchface. Fried also appears in the music video for "The Guitar (The Lion Sleeps Tonight)."

Fried is well-known among TMBG fans for his remixes of their songs. In 1989, he remixed the song "The World's Address," which appeared on Miscellaneous T. Soon after, he remixed "She's Actual Size" which would be renamed "Larger Than Life" for the I Palindrome I EP and the vinyl release of The Guitar (The Lion Sleeps Tonight) EP.

Fried's current act RADIO WONDERLAND opened for TMBG on March 28th, 2009 in New York. That same night he also joined the band onstage to narrate the "Venue Songs" portion of their show.

Fried's own work might be described as Performance Art-meets-Electronica. His credits span the "classical" music world (apparently being the youngest composer in Schirmer Books' American Music in the 20th Century) and other dance remix work for such names as Chaka Khan and Ofra Haza. A year before TMBG premiered "The World's Address" on The Frank O' Toole Show, he was working on songs very similar in style to what would become his remix. This work includes the song "Jimmy Because (My Name Is)," of which Atlantic Records released a 12" LP containing five remixes. Much of his more recent work explores what it means to be electronic in electronic music. His Music for Robots, written especially for the robotic instruments of the NYC collective LEMUR, can be heard and seen here. Fried's latest project RADIO WONDERLAND is a return to the club scene, with a real steering wheel and four old shoes hit with sticks controlling a laptop which turns live commercial radio into groove-based new music. Fried has been working with live radio since the early '80s, so it's hard to tell if TMBG's use of live radio in concerts inspired Fried, or if it was the other way around.