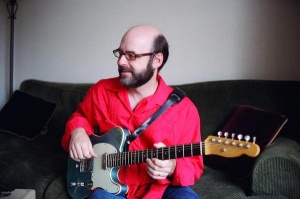 Jay Sherman-Godfrey played guitar on John Henry, Factory Showroom, State Songs, and both Mono Puff LPs (Unsupervised and It's Fun To Steal), which he also sang harmony vocals on. He also played guitar on Hello The Band's sole EP and is credited as playing the cello on Will Rigby (EP).

Besides working with TMBG, Jay co-founded the band World Famous Blue Jays in the '80s singing and playing lead guitar. He has also worked with Laura Cantrell, Amy Rigby, and Elvis Costello. He also released a solo album Twoscore, which featured Jeremy Chatzky on bass and was mixed by former TMBG backing-band member Tony Maimone.